Donald Trump’s former doctor has said he did not write a 2015 letter declaring the then-Republican presidential candidate’s “astonishingly excellent” health, US media report.

The White House has not yet commented on the physician’s allegation.

Mr Bornstein also said that Mr Trump’s bodyguard had carried out a “raid” on his offices in February 2017, removing all of Mr Trump’s medical records.

In an interview with CNN, Mr Bornstein said the 2015 letter suggesting that Mr Trump would be the “healthiest individual ever elected to the presidency” was not his professional assessment.

“[Mr Trump] dictated the letter and I would tell him what he couldn’t put in there,” he said.

It is not clear why Mr Bornstein is making these allegations now.

It is not clear why Mr Bornstein is making these allegations now. 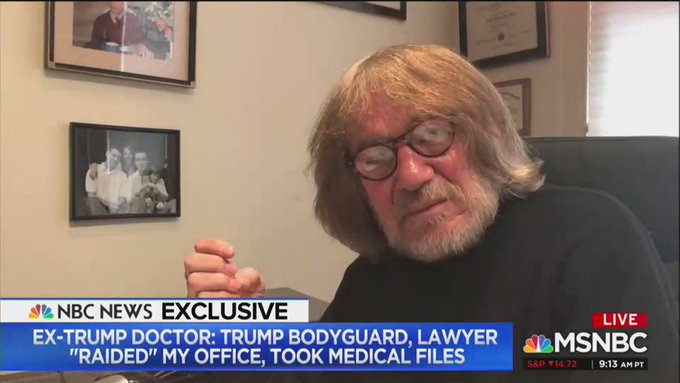 “I couldn’t believe anybody was making a big deal about a drug that’s to grow his hair, which seemed to be so important… what’s the matter with that?”

What was in the letter?

The letter’s contents included statements on Mr Trump’s physical strength and stamina, which were described as “extraordinary”.

His blood pressure and laboratory tests were described as “astonishingly excellent” and he was said to have lost 15 pounds (7kg) over the course of a year.

It added that Mr Trump had no forms of cancer and had not had joint surgery.

A few weeks ahead of its release, Mr Trump tweeted that Mr Bornstein’s medical report would show “perfection”.

“I am fortunate to have been blessed with great genes,” Mr Trump, who became the oldest president to be elected in US history, wrote on Facebook at the time.

In January this year Mr Trump had a three-hour examination amid speculation over his mental health.

His White House doctor, Ronny Jackson, said at the time: “I have no concerns about his cognitive ability or neurological functions.”

To Whom My Concern:

I have been the personal physician of Mr Donald J. Trump since 1980. His previous physician was my father, Dr Jacob Bornstein. Over the past 39 years, I am pleased to report that Mr Trump has had no significant medical problems. Mr Trump has had a recent complete medical examination that showed only positive results. Actually, his blood pressure, 110/65, and laboratory test results were astonishingly excellent.

Over the past twelve months, he has lost at least fifteen pounds, Mr Trump takes 81 mg of aspirin daily and a low dose of a statin. His PSA test score is 0.15 (very low). His physical strength and stamina are extraordinary.

Mr Trump has suffered no form of cancer, has never had a hip, knee or shoulder replacement or any other orthopaedic surgery. His only surgery was an appendectomy at age ten. His cardiovascular status is excellent. He has no history of ever using alcohol or tobacco products.

If elected, Mr Trump, I can state unequivocally, will be the healthiest individual ever elected to the presidency.

What about Mr Bornstein’s office ‘raid’?

The New York City-based physician said he was visited by one of Mr Trump’s personal bodyguards and two other men at his office on 3 February 2017.

“They must have been here for 25 or 30 minutes, it created a lot of chaos,” Mr Bornstein told NBC News, adding that the incident made him feel “raped, frightened and sad”.

He said the original and only copy of Mr Trump’s medical charts, including lab reports, were taken by his aides.

The incident took place shortly after The New York Times published a report in which Mr Bornstein said he had prescribed Mr Trump with Propecia, an anti-baldness drug.

White House press secretary Sarah Sanders later insisted that the incident was not a raid and that it was “standard procedure” for the White House Medical Unit to take possession of the president’s medical records.

US President Donald Trump has signed an order to ban bump-stock devices, which were used by a gunman who killed 58 Las Vegas concert-goers last year. Speaking at the White House, Mr Trump said he […]

The official website of US President Donald Trump has been hacked by an apparent cryptocurrency scam. His re-election campaign team is investigating the security breach. “The world has had enough of the fake news spreaded […]

The US attorney general has ordered a pause on federal executions that were resumed in 2020 under the Trump administration after a 17-year hiatus. Merrick Garland, the US government’s top lawyer, also ordered a review […]