Disgracefuld former U.S Member of the House of Representatives and e[strange]d husband of Presidential Notformeminee Hillary Clinton’s most intimate advisor Huma Abe[ginaga]in entered The Ranch, a facility in central Tennessee that offers addicts of just about anything a choice of treatment methods for whatever they are addicted to.

The Ranch is apparently treating Weiner so he can learn to control his wiener.  According to the Ranch’s website, the activities the Ranch treat clients with Sex Addiction include (among others):

The Ranch does not say it treats someone who sexts a pic of himself lying on his marital bed next to his infant son with a fully loaded package.  Maybe there is no treatment for that. 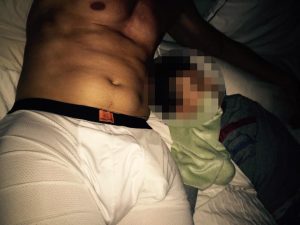 Ex-New York congressman Anthony Weiner has been released from federal prison after serving about 15 months for sending explicit messages to a minor. Weiner has been transferred to a halfway house in Brooklyn where he […]

Anthony Weiner pleads guilty to sexting with 15-year-old girl, could serve up to 27 months in prison

BY  Victoria Bekiempis Adam Edelman Pervy ex-pol Anthony Weiner, his stunning fall from grace complete, faces federal jail time after pleading guilty Friday to sending obscene material to a minor. “I have a sickness, but […]

The FBI has obtained a warrant to start reviewing emails found on a laptop used by top Hillary Clinton aide Huma Abedin and her husband Anthony Weiner, according to reports from US media. The Wall […]