Rapper Tay-K has been sentenced to 55 years in prison for the 2016 murder of 21-year-old Ethan Walker. He was also fined $10,000 fine for the killing. Additionally, he was sentenced to 30 years in prison for one count of aggravated robbery and an additional two 13-year sentences for two other counts of the crime. The two 13-year sentences come with $3,000 fines. The sentences will run concurrently.

Tay-K’s song The Race was used as evidence against him during his sentencing.

The 19-year-old’s real name is Taymor Travon McIntyre and he is best known for the track which was released in 2017.

It could now impact on how many years he will spend in prison.

Prosecutors played the music video in full for the jury on Monday afternoon. It shows him standing in front of his own “Wanted!” poster while flashing gang signs and guns at the camera.

A print-out of the lyrics was also shown to the court. 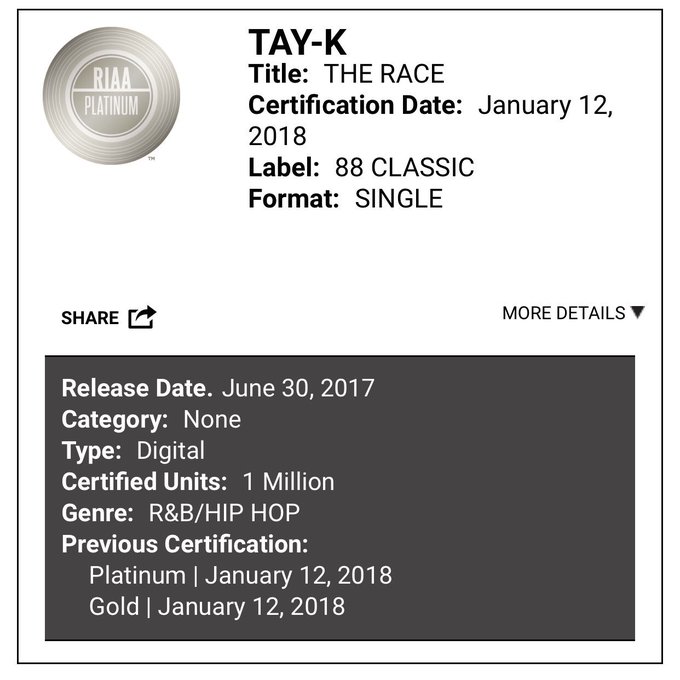 CBS reporter Jason Allen, who has been covering the case at Tarrant County Courthouse, said: “Part of the song’s popularity was the fact it seems to be about the very murder that T-Kay has been found guilty of.

“Jurors were hearing it for the first time as they decide how long he would potentially spend in prison.”

The song was released in 2017 just as T-Kay was arrested.

He was one of seven teens accused in the 2016 murder of 21-year-old Ethan Walker, during a robbery at a home in Tarrant County, Texas.

Not long after the incident happened, Tay-K was arrested and charged with Walker’s death. Over six months after he was placed on house arrest, Tay-K broke off his ankle monitor and went on the run.

He was eventually apprehended in New Jersey on June 30, 2017.

Prosecutors also introduced screenshots of the video into evidence, as well as images from Tay-K’s social media accounts. These included the cover of his EP Living Like Larry in which he holds a gun, and a picture of him in jail.

Tay-K is still awaiting trial for a number of other crimes including the murder of photographer Mark Saldivar at a Chick-Fil-A in San Antonio, Texas after first attempting to steal his photography equipment.

About World Justice News 2699 Articles
Brings you breaking crime news and other interesting crime stories from around the world.

A court in Texas has halted the execution of Rodney Reed, convicted for murder, in a case that has attracted huge public attention in the US. Reed has been 21 years on death row for […]

He was allegedly doused with petrol and set on fire by another boy Kayden Culp, 10, is believed to have been playing in a field with two other boys when one doused him with petrol […]