One of Canadian PM Justin Trudeau’s top ministers has quit saying she has lost confidence in the government’s handling of a corruption trial.

Treasury Board President Jane Philpott said: “I must abide by my core values, my ethical responsibilities, constitutional obligations.”

Mr Trudeau has denied political meddling in an investigation into engineering giant SNC-Lavalin.

The opposition leader last week called on the prime minister to resign.

Ms Philpott announced her decision to step down on Monday, posting her resignation letter detailing her “serious concerns” with “evidence of efforts by politicians and/or officials to pressure the former Attorney General to intervene in the criminal case involving SNC-Lavalin”.

“There can be a cost to acting on one’s principles, but there is a bigger cost to abandoning them,” her resignation letter said.

The former family physician has held key portfolios in Mr Trudeau’s cabinet – health, indigenous services and, until this week, treasury board president – since being elected in 2015.

She will remain as a member of the Liberal caucus.

This is the third high-profile resignation following accusations Mr Trudeau and some of his top aides tried to shield one of the country’s biggest firms from a corruption trial.

Ms Wilson Raybould has said she and her staff faced four months of a “sustained” and “inappropriate effort” late last year to push for a possible deferred prosecution agreement for the Quebec-based engineering and construction company.

That agreement would have allowed the firm to avoid a criminal trial and instead agree to alternative terms or conditions, like penalties or enhanced compliance measures.

The company and two of its subsidiaries face fraud and corruption charges in relation to about C$48m ($36m; £28m) in bribes it is alleged to have offered to Libyan officials between 2001-11.

On 18 February, Mr Trudeau’s top aide, Gerald Butts, announced he was resigning, denying in a statement that he or anyone on his staff had done anything wrong but saying he had to leave so as not to be a distraction from the “vital work” being done by the team. 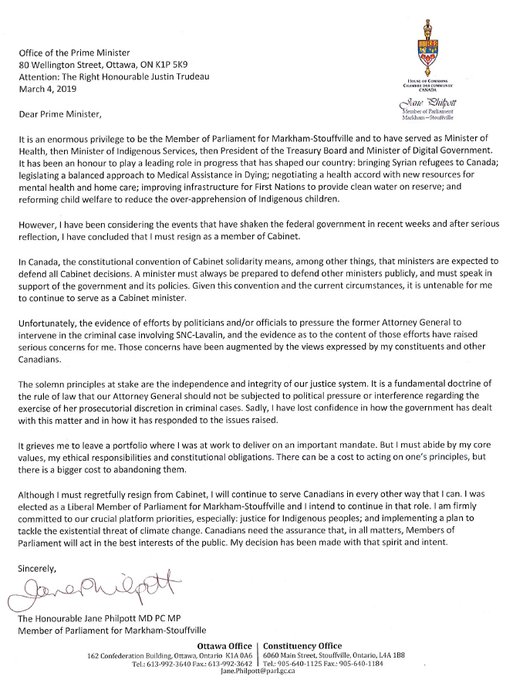 It grieves me to resign from a portfolio where I was at work to deliver an important mandate. I must abide by my core values, my ethical responsibilities, constitutional obligations. There can be a cost to acting on one’s principles, but there is a bigger cost to abandoning them.

He is expected to speak on Wednesday before the House of Commons Justice Committee, which is looking into the matter.

Mr Trudeau has maintained that any discussions he had with Ms Wilson Raybould were lawful and appropriate and that his government was concerned that thousands of jobs were at stake if the company went to trial.

The affair has proven politically damaging for Mr Trudeau.

A number of opinion polls indicate his popularity is slipping in the run-up to a general election scheduled for October.

About World Justice News 2562 Articles
Brings you breaking crime news and other interesting crime stories from around the world.

The US Department of Justice is discussing a possible deal with Huawei’s finance chief Meng Wanzhou, according to reports. The deal would reportedly let Ms Meng return to China from Canada, where she was arrested […]

A Canadian court has ruled that the case of senior Huawei executive Meng Wanzhou, who is fighting extradition to the United States, can go forward. A judge found that the case meets the threshold of […]

Canadian Governor General Julie Payette has resigned amid claims she created a toxic work environment for her staff. The representative of the head of state, Queen Elizabeth II, quit amid reports a highly critical workplace […]