Dutch anti-Islam political leader Geert Wilders has been convicted of insulting a group and inciting discrimination.

But no penalty was imposed by the court near Amsterdam on Wilders, whose party is leading in polls ahead of parliamentary elections in March.

Wilders was also acquitted of inciting hate over telling supporters in March 2014 he would ensure there were fewer Moroccans in the Netherlands.

He called the guilty verdict “madness” in a tweet posted a short time later.

He said he would appeal.

The three-week trial was triggered when police received 6,400 complaints about remarks Wilders made during a municipal election campaign in The Hague.

At a campaign meeting, he asked supporters whether they wanted “fewer or more Moroccans in your city and in the Netherlands”.

When the crowd shouted back “Fewer! Fewer!” a smiling Wilders responded: “We’re going to take care of that.”

At the trial, prosecutors took testimony from Dutch-Moroccans who said his comments made them feel like “third-rate citizens”.

Wilders had argued his comments should be protected by his right to freedom of speech, reports the BBC’s Anna Holligan in the Schiphol court.

But judges ruled there were limits and that this right could not be used to limit the freedom of others – in this case, a minority group.

“If a politician crosses the line, that doesn’t mean free speech is being restricted,” said Presiding Judge Hendrik Steenhuis. “A crime cannot be protected by the right to free speech.”

The verdict suggests that, in effect, Wilders and his party staged a stunt. Judges found evidence that they planned the remarks in advance and coached the supporters on how to respond. He had intended to insult, they said.

The judges described it as an “extraordinary case” because Wilders was the leader of a political party and had a duty not to polarise society.

They said the conviction was punishment enough and that there would be no jail sentence or fine, as the prosecution had requested.

This guilty verdict will do little to damage Geert Wilders’ political aspirations.

In fact, the trial has provided the populist leader with the two vital elements upon which his party thrives – a platform to promote his political message and masses of media attention. In court he repeated warnings about the dangers of Islam and immigration.

Many supporters see this trial as reaffirming their belief that Wilders is a courageous leader prepared to stand up for them and address the issues a politically correct elite is afraid to talk about. They have been emboldened by populist victories in the UK and US. Wilders’ Freedom Party (PVV) is currently 10 percentage points ahead of the ruling liberal party in the polls.

In response to the guilty verdict, Mr Wilders accused the judges of convicting “half of the Netherlands” – a reference to research commissioned by the PVV which found 43% of the Dutch public believe the country has a problem with Moroccans. 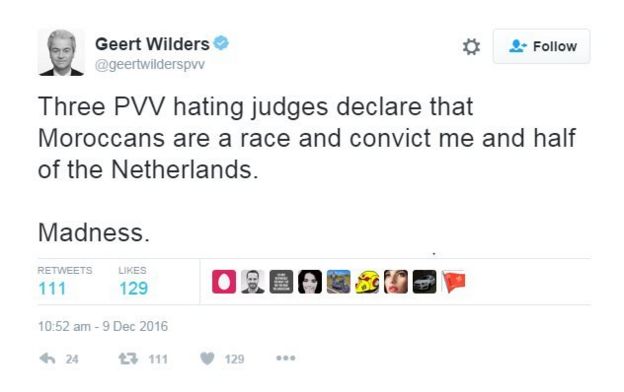 Wilders was previously prosecuted in 2011, over anti-Islam comments such as comparing the religion to Nazism and calling for a ban on the Koran. He was acquitted and the case was widely seen as giving the populist leader a publicity boost.

British banker Rurik Jutting has been found guilty of murdering two Indonesian women in Hong Kong, in a case that has gripped the city. A jury took around four hours to find an expressionless Jutting, […]

A Dutch court has convicted populist anti-Islam politician Geert Wilders of hate speech charges at the end of a trial he branded a politically motivated “charade” that endangered freedom of speech. Presiding Judge Hendrik Steenhuis […]

The defense began their case last week and it would appear that there are several inconsistencies that they are focusing on.  Maddox Kilgore got his opportunity to question lead detective Phil Stoddard about many of […]