The government of El Salvador has started sealing off the doors and windows of prison cells in which gang members are held.

On Monday, security minister Osiris Luna said that “no ray of sunlight” would enter the cells holding jailed gang members.

He also released photos of the cell doors being barricaded with plywood and in some cases sheets of metal.

The move comes after more than 50 people were killed over the weekend.

Mr Luna said the move was necessary to stop the recent wave of gang-related killings in the country. He said the inmates were passing messages to the outside about who they want killed.

President Nayib Bukele had earlier posted a video on Twitter which he said showed inmates forming letters with their T-shirts to send messages to other cells. 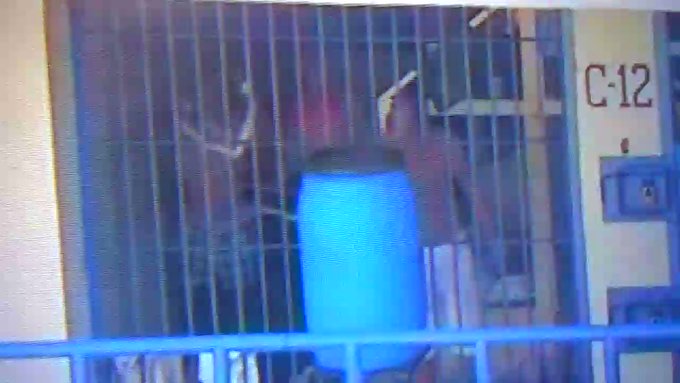 The president, who campaigned on a promise to end El Salvador’s rampant gang violence, was elected last year.

Since he took up office in June, he has introduced tougher measures within the prisons holding gang members.

The measures have included:

A spike in murders over the weekend prompted him to further toughen those measures. First, he ordered a 24/7 lockdown and on Monday his security minister followed that up with ordering the sealing of the cell doors and windows.

The government also published photos of inmates with their hands bound and made to sit in close proximity while their cells were being searched.

The photos have caused outrage among human rights groups who have pointed out that as well as being “humiliating and demeaning” to the prisoners, they show that social-distancing measures to combat the spread of coronavirus are being flaunted in El Salvador’s prisons.

“Prisoners have been sentenced to deprivation of liberty, not to death. Governments must take urgent measures to protect them during Covid-19,” José Miguel Vivanco of Human Rights Watch’s Americas division tweeted.

President Bukele has come in for criticism by rights groups before but he argues his zero tolerance approach to crime has both been successful – there have been several days since he came to power in which no murders were recorded – and popular among citizens who have suffered from gang violence for decades.

About World Justice News 2429 Articles
Brings you breaking crime news and other interesting crime stories from around the world.

The Wisconsin Supreme Court on Wednesday overturned the state’s stay-at-home order to prevent the spread of COVID-19. The high court issued a 4-3 decision, ruling that Wisconsin’s Department of Health Services Secretary-designee Andrea Palm exceeded her powers by issuing […]

A leading disinfectant producer has issued a strong warning not to use its products on the human body after Donald Trump suggested they could potentially be used to treat coronavirus. Reckitt Benckiser, which owns Lysol […]

The organisers of a rural rave which attracted 3,000 people from around the UK have been fined £10,000 – days after tougher penalties came into force. Police criticised the “irresponsible” actions of those at the […]