The Montreal-based affiliate network AdCenter has closed shop overnight. The company gives no reason for its sudden decision, which follows a few weeks after an investigation linked the outfit to one of the largest piracy-related scam operations.

Scammers have been around for centuries but, on the Internet, they can reach broader audiences than ever.

Most people are familiar with ransomware, trojans, and the prince who inherited millions of dollars. These ploys are targeted at anyone who’s willing to bite.

Scams can also be more tailored towards a specific audience. This includes people who search the web for pirated content. Malicious actors trap prospective pirates by pointing them to their own streaming portals.

We have seen these promotions in the comment sections of pirate sites but also on legitimate platforms. At the same time, scammers exploit weaknesses in reputable sites to place their ‘offers’ in Google’s top search results.

The business model behind these schemes is simple and effective. Through various links and advertisements, people are lured into signing up for a website that offers ‘free’ movies, sports events, or books.

A popular variation of this scheme uses a video player that shows a short movie intro, after which people are redirected to a signup page. As part of this process, they are eventually asked to provide their credit card details to start a free trial.

After completing the registration process, subscribers indeed get access to a movie library. Unsurprisingly, the selection doesn’t include the latest blockbusters that were advertised but relatively unknown licensed films instead.

This isn’t what people were promised and many will immediately cancel their ‘free’ subscription. However, some people simply forget to do so, which results in a $49.95 subscription payment after the five-day trial ends.

A few weeks ago, Radio Canada’s program Décrypteurs published a detailed investigation into one of the largest pirate scam operations. The research found that a Barbados company called Hyuna International was behind more than 1,100 of these sites.

Hyuna didn’t appear to advertise its services directly, however. The company reportedly used the services of the marketing company AdCenter, which is based in Montreal. AdCenter, for its part, relies on thousands of affiliates who do the promotional work.

When the investigation came out AdCenter dismissed the allegations as false, misleading, and downright defamatory. However, Radio Canada interviewed over a dozen former AdCenter employees to confirm the misleading nature of the subscription scheme and stands behind its findings to this day.

After the initial media storm subsided, AdCenter appeared to operate as usual. However, behind the scenes, there was plenty going on and a few days ago, affiliates were informed that the “AdCenter” brand had been shut down with immediate effect.

“After careful consideration, we have decided to close the Ad-Center brand permanently. We would like to thank everyone who made Ad-Center so successful over the last 10 great years,” the email reads.

It is not clear if the shutdown has anything to do with Radio Canada’s exposé. TorrentFreak reached out to the company asking for additional information but, at the time of writing, we have yet to hear back.

The email mentions that all affiliates will be fully paid out and the AdCenter website is still up and running as well. It makes no mention of the closure but the signup link no longer works and login credentials have been deleted.

“We apologize for any inconvenience this may have caused you, and we wish you the best of success in your future endeavors. Ad-Center login will be removed as of today,” the AdCenter email ends. 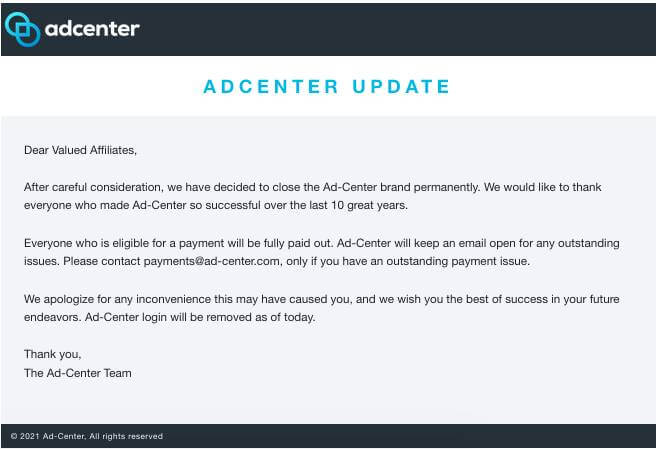 While the AdCenter ‘brand’ has been discontinued, the parent company “Action Media” remains operational, as far as we know. Perhaps a new brand will surface soon?

For now, it is clear that AdCenter closed shop overnight and affiliates will have to find a new home. That’s pretty ironic, considering the following line (29 seconds in) from one of AdCenter’s recent advertisements.

“The networks I trusted let me down and disappeared overnight. I wasted time, money, and got no closer to my dreams.”

Canadian Prime Minister Justin Trudeau has proposed a two-year ban on some foreigners buying homes. The measure comes as the country grapples with some of the worst housing affordability issues in the world. Prices have […]

A Canadian father who has not been vaccinated against Covid has temporarily lost the right to see his 12-year-old child. A judge ruled his visits would not be in the child’s “best interest”. It followed […]

Canadian Prime Minister Justin Trudeau has taken the unprecedented step of invoking the Emergencies Act to crack down on anti-vaccine mandate protests. Mr Trudeau said the scope of the measures would be “time-limited”, “reasonable and […]