At the US Court of Federal Claims, software company Bitmanagement requests $155 million in copyright infringement damages from the US Government. The software vendor won its appeal earlier this year, which already concluded that the Navy used hundreds of thousands of software copies without permission.

The U.S. Government is known to go after copyright infringing companies and individuals, both domestically and abroad.

This doesn’t mean that there are no copyright issues within its own ranks.

Five years ago the US Navy was sued for mass copyright infringement and accused of causing hundreds of millions of dollars in damages.

The lawsuit was filed by the German company Bitmanagement. It’s not a typical piracy case in the sense that software was downloaded from shady sources. However, the end result is the same.

It all started in 2011 when the US Navy began testing the company’s 3D virtual reality application ‘BS Contact Geo’. After some testing, the Navy installed the software across its network, assuming that it had permission to do so.

This turned out to be a crucial misunderstanding. Bitmanagement said it never authorized this type of use and when it heard that the Navy had installed the software on 558,466 computers, the company took legal action.

In a complaint filed at the United States Court of Federal Claims in 2016, the German company accused the US Navy of mass copyright infringement and demanded damages totaling hundreds of millions of dollars.

The Court initially dismissed the complaint but Bitmanagement appealed. Earlier this year, the Court of Appeals for the Federal Circuit sided with the German software company, concluding that the US Government is indeed liable.

This meant that the matter was reverted back to the Federal Claims court, to determine the appropriate damages amount. Over the past weeks, the US submitted several sealed filings hoping to keep the damages under control, but Bitmanagement was having none of it.

Unlike the Government’s arguments, BitManagement’s position is not kept out of the public eye. The company openly argues that it has the right to $155,400,000 in copyright infringement damages.

This figure is based on more than 600,000 copies of the software that were installed. This is multiplied by the negotiated $370 license per install, minus a 30% discount.

“The evidence at trial showed that the Navy made at least 600,000 copies of BS Contact Geo that were not monitored by Flexera. For these 600,000 copies, unrebutted expert testimony at trial demonstrated that the parties would have agreed in a hypothetical negotiation to a final negotiated price of $259 per copy,” Bitmanagement writes. 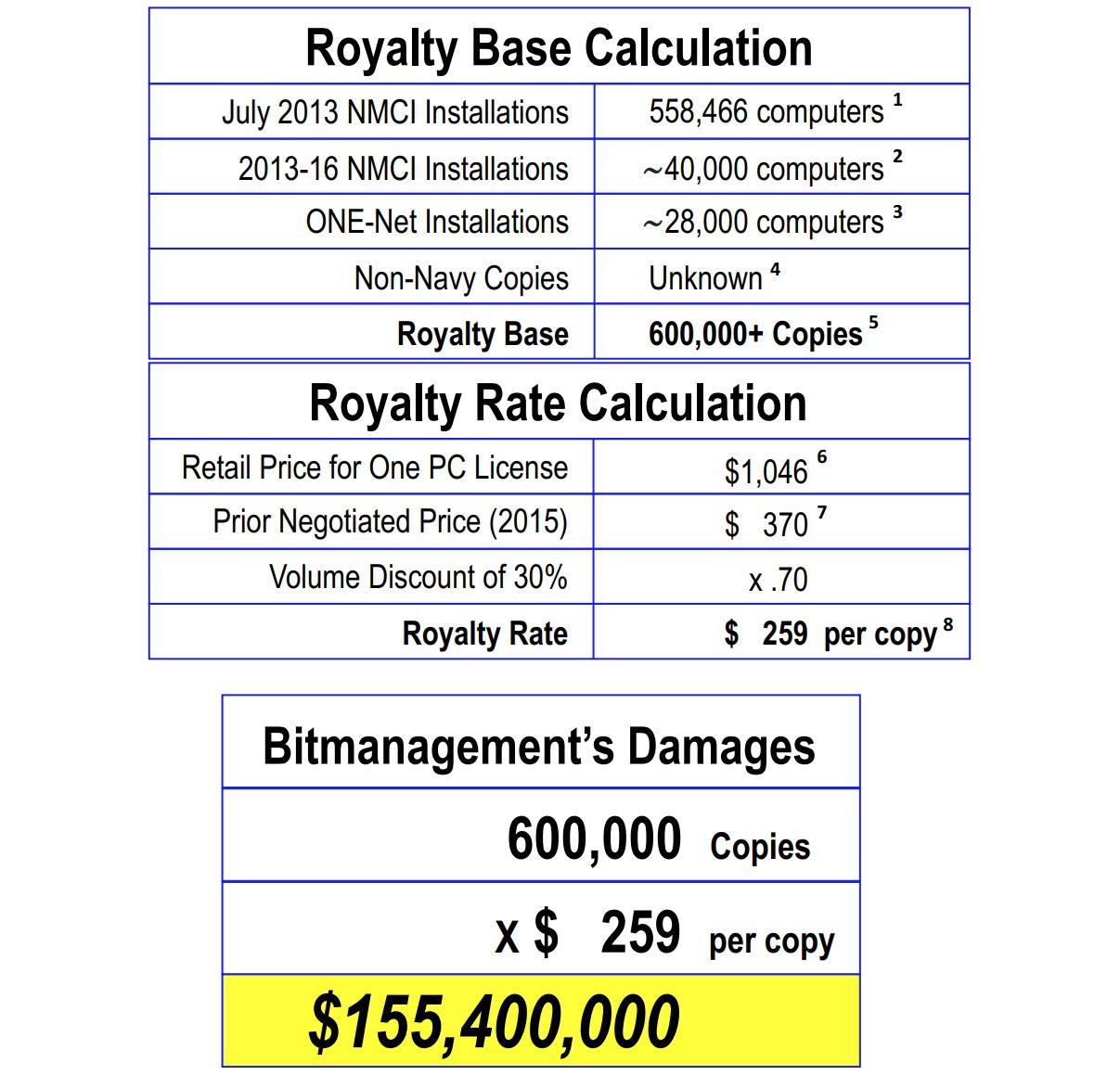 The Government’s filings are not public but Bitmanagement’s brief suggests that the Government tried to have the damages amount lowered. Among other things, it suggested that a bigger discount should have been possible.

The software company disputes that. While it did consider bigger discounts for other software, this never was an option for “BS Contact Geo.”

“[T]he Navy would not have sought, nor would Bitmanagement have accepted, a volume discount greater than 70%. Although years before the hypothetical negotiation Bitmanagement considered selling its software at more discounted prices to the Navy, those preliminary discussions and offers involved less-advanced software than BS Contact Geo”

Also, by the time the licensing discussions would have taken place, the Government indicated that the software was hard to replace, which boosted the software company’s negotiation position.

It is now up to the U.S. Court of Federal Claims to determine if the Government must pay $155 million in damages or if a reduction is warranted. It seems unavoidable that some compensation has to be paid, however.

Interestingly this is not the first time that the U.S. military has been “caught” pirating software. A few years ago it was accused of operating unlicensed logistics software, a case the Obama administration eventually settled for $50 million.

A copy of Bitmanagement’s brief regarding the damages calculation is available here (pdf).

The RIAA has secured a multi-million dollar victory in its piracy lawsuit against YouTube-rippers FLVTO.biz and 2conv.com. A Virginia federal approved the damages request after a hard-fought legal battle that took place over several years. […]

Katy Perry will no longer have to pay $2.8m (£2.1m) to a rapper who said she stole his song on her hit Dark Horse. Marcus Gray sued Perry in 2014, saying she had plagiarised an […]