A huge coalition of international rightsholder organizations has appealed to the new presidency of the European Council to find an effective solution to the so-called ‘Value Gap’. Featuring an army of record labels, film groups, sports bodies and publishers, the authors are calling for an end to safe harbors and compulsory licensing for sites like YouTube.

While piracy of all kinds is often viewed as a threat to the creative industries, a new type of unauthorized content distribution has been gaining prominence over the past few years.

Sites like YouTube, that allow their users to upload all kinds of material – some of it infringing – are now seen as undermining a broad range of industries that rely on both video and audio to generate revenue.

The cries against such User Uploaded Content (UUC) sites are often led by the music industry, which complains that the safe harbor provisions of copyright law are being abused while UUC sites generate review from infringing content. In tandem, while that free content is made available, UUC sites have little or no incentive to pay for official content licenses, and certainly not at a rate considered fair by the industry.

This mismatch, between the price that content industries would like to achieve for licenses and what they actually achieve, is now known as the ‘Value Gap’.

Today, in advance of an EU meeting on the draft Copyright Directive, a huge coalition of rightsholder groups is calling on the new EU Presidency not to pass up an “unmissable opportunity” to find a solution to their problems.

In a letter addressed to the Presidency of the Council of the European Union, which Bulgaria officially took over January 1, 2018, an army of rightsholders lay out their demands.

“We have formed an alliance to campaign for a solution to a major problem which is holding back our sector and jeopardizing future sustainability – the Transfer of Value, otherwise known as the Value Gap.

“User uploaded content services have become vast distributors of our creative works e.g. film, music, photos, broadcasts, text and sport content – all while refusing to negotiate fair or any copyright licences with us as right holders.” 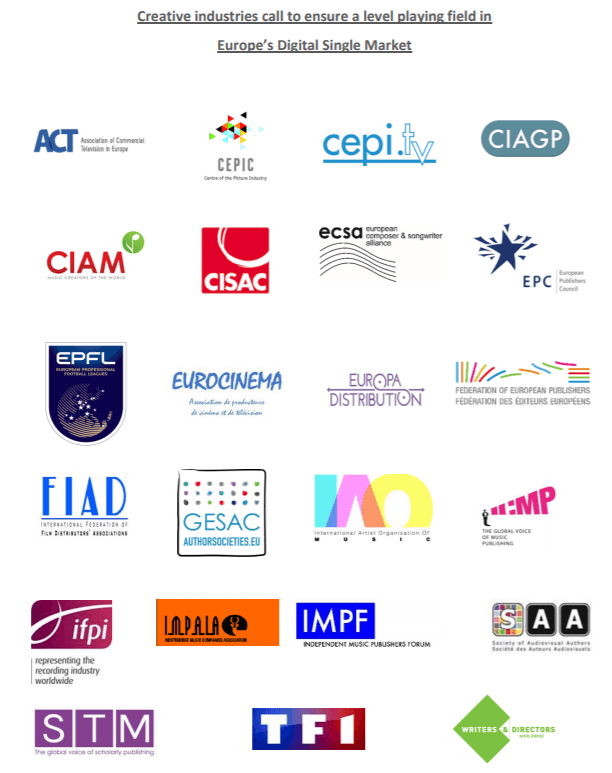 Featuring groups representing many thousands of rightsholders, the coalition is the broadest yet to call for action against the ‘Value Gap’. Or, to put it another way, to demand a change in the law to prevent sites like YouTube, Facebook and other hosting platforms from “hiding” behind provisions designed to protect them from the infringing activities of others.

“This problem is caused by a lack of clarity surrounding the application of copyright to certain online services and the abuse of European copyright ‘safe harbor’ rules in the e-Commerce Directive (2000/31/EC) by those services,” the coalition writes.

Referencing the EU Copyright Directive proposal tabled by the European Commission in September 2016, the coalition says that UUC services communicating content to the public should be compelled to obtain licenses for that content. If they play an “active role” through promotion or optimization of content, UUC platforms should be denied ‘safe harbors’ under copyright law, they argue.

Noting that there is “no solution” to the problem without the above fixes, the coalition cites last year’s ruling by the Court of Justice of the European Union which found that The Pirate Bay knowingly provide users with a platform to share copyright-infringing links.

“It is important to recall that the underlying policy objective of this legislation is to address the current unfairness in the online market due to the misapplication of copyright liability rules by UUC services. We would therefore like to stress that the focus should remain on finding effective solutions to tackle this issue.

“As an alliance, we look forward to working with your Presidency to achieve an effective solution to the Value Gap problem for the benefit of Europe,” the coalition concludes.

The letter, addressed to Prime Minister Borissov, Minister Pavlova and Minister Banov, arrives in the wake of an alert sounded by several Members of the European Parliament.

Earlier this month they warned that the EU’s proposed mandatory upload filters – which could see UUC sites pre-screen user-uploaded content for infringement – amount to “censorship machines” that will do more harm than good.

The full letter can be found here (pdf)

Police in Italy say they have shut down a major IPTV network responsible for around 80 percent of illegal IPTV supply in the country. Operation Black Out was carried out by 200 specialists in 11 […]

Before being shut down by law enforcement, Jetflicks and iStreamitAll were said to be two of the largest pirate streaming services in the United States. Darryl Julius Polo, who founded iStreamitAll and programmed for Jetflicks, […]

A Washington District Court has issued a devastating order against a copyright holder of the film “Once Upon a Time in Venice,” which chases alleged BitTorrent pirates for cash settlements. The Court points out that […]