Two white farmers in South Africa who forced a black man into a coffin have been sentenced to jail for more than 10 years each.

Theo Martins Jackson and Willem Oosthuizen were convicted in August for attempted murder and kidnapping.

They accused Victor Mlotshwa of trespassing on their land, beat him up, made him get into a coffin and threatened to burn him alive.

Part of their sentence is also for assaulting the only witness in an attempt to stop him from testifying.

The case has caused outrage in South Africa and highlighted racial tensions in some farming communities, says the BBC’s Pumza Fihlani in Johannesburg.

Mr Mlotshwa only reported the matter after footage of the assault emerged on YouTube months later.

In a court affidavit, Jackson and Oosthuizen said they did not mean to harm Mr Mlotshwa when the assault happened in August 2016 but merely wanted to “teach him a lesson”.

Mr Mlotshwa denied trespassing, saying he was taking a short cut to the shops, where he had been sent by his mother. 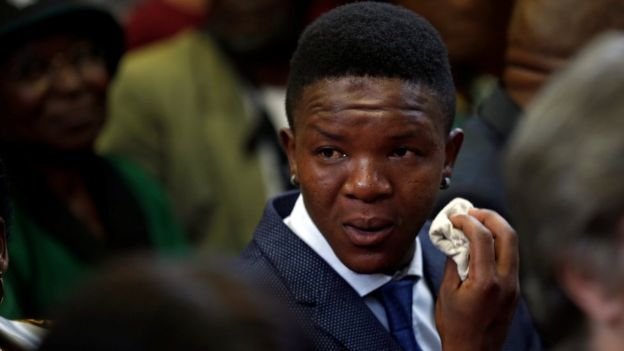 The two farmers laid their heads on the bench and some of their relatives wept in the public gallery after the judge handed down her judgement at the court in Middelburg, 165km (100 miles) east of Johannesburg, reports the AFP news agency.

Judge Segopotje Sheila Mphahlele said her sentence was influenced by the fact that men seemed to have been driven by racism when they attacked Mr Mlotshwa and had shown no remorse during the proceedings.

“Both men are aged 29 and 30 and would have spent most of their lives in democratic South Africa,” she said, adding that she wanted to send a harsh message to communities that still practised racism.

The two intend to appeal the sentence.

Five police officers and a soldier have been shot dead during a raid on their station in South Africa’s Eastern Cape province. In a statement, the South African Government News Agency said three officers were killed instantly. […]

Former South African president Jacob Zuma has said he’s ready to be jailed should the courts decide so. In a lengthy statement on Thursday, Mr Zuma explained why he has not appeared before a commission […]

South Africa withdraws from ICC: what next for human rights and Africa?

The recent decision made by South Africa to leave the International Criminal Court (ICC) has been criticized by many, and holds a series of serious implications for the politically plagued country. At the end of […]