Tougher punishments for the most serious speeding offences have come into force in England and Wales.  Under new guidelines, fines for drivers caught doing 51mph in a 30mph zone or 101mph on a motorway will start from 150% of weekly income, rather than the previous level of 100%.  The Sentencing Council said it wanted a “clear increase in penalty” as the seriousness of offending increases.  Motoring groups have broadly welcomed the new guidelines for magistrates.

The new measures follow responses to a consultation.  It said previous guidelines did not properly take into account the increase in potential harm that can result as speed above the limit rises.  Fines will also be increased for when motorists drive at 41mph or faster where there is a 20mph limit.  However, because the maximum fines allowed by law remains the same, speeding drivers cannot be fined more than £1,000 unless the offence takes place on a motorway, where the limit is £2,500.

Some 244 people were killed in crashes that occurred when a driver was breaking the speed limit on Britain’s roads in 2015. 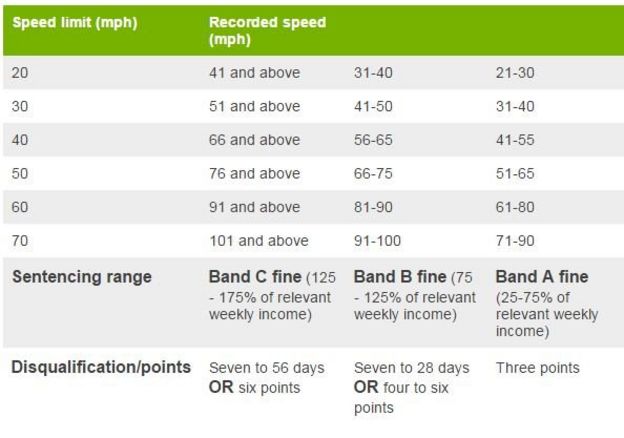 He added: “Responsible drivers will welcome the changes coming into force today.

“The majority of drivers who keep to the correct speed, as well as driving to the conditions, won’t be affected.

“It is only those who deliberately drive dangerously who will end up in court.”

Do magistrates have to stick to the guidelines?

RAC Foundation director Steve Gooding said while the new measures “underline how seriously the courts take speeding offences”, the limit on fines means there is not a “level playing field”.

He also questioned whether police officers have enough resources to ensure the tougher punishments have an impact on road safety.

Mr Gooding said: “While we broadly support linking the amount of the penalty with income, the cap on the level of fines means that this link is broken for high-income drivers – hardly a level playing field.”

“I hope that magistrates ensure the new sentences are consistently applied.”

Sentence levels for less serious offences are not changing.

Myanmar will not address UN General Assembly after compromise
German election: Exit polls show close race to succeed Angela Merkel
German SPD Secretary-General says we have mandate to govern
In Mexico, some Haitians find a helping hand
Sudan: Ethiopian troops 'repelled' after al-Fashaga advance
UN and Afghanistan's Taliban, figuring out how to interact
In redistricting, big say for big cities in DC power balance
Jake Sullivan: the Biden insider at the center of the Afghanistan crisis
China needs to cut coal at home too for world to reach Paris climate goal
China's Xi warns of 'grim' situation with Taiwan