Wikileaks has published details of what it says are wide-ranging hacking tools used by the CIA.

The alleged cyber-weapons are said to include malware that targets Windows, Android, iOS, OSX and Linux computers as well as internet routers.

Some of the software is reported to have been developed in-house, but the UK’s MI5 agency is said to have helped build a spyware attack for Samsung TVs.

A spokesman for the CIA would not confirm the details.

A spokesman for the UK Home Office was unable to comment.

Wikileaks said that its source had shared the details with it to prompt a debate into whether the CIA’s hacking capabilities had exceeded its mandated powers.

The NSA faced huge embarrassment when many of its secrets were revealed by Edward Snowden, and now the CIA appears to face similar problems, the BBC’s security correspondent Gordon Corera said.

The effort to compromise Samsung’s F8000 range of smart TVs was codenamed Weeping Angel, according to documents dated June 2014.

They describe the creation of a “fake-off” mode, designed to fool users into believing that their screens had been switched off.

Instead, the documents indicate, infected sets were made to covertly record audio, which would later be transferred over the internet to CIA computer servers once the TVs were fully switched back on, allowing their wi-fi links to re-establish.

Under a “future work” section, it is suggested that video snapshots might also be taken and the wi-fi limitation be overcome. 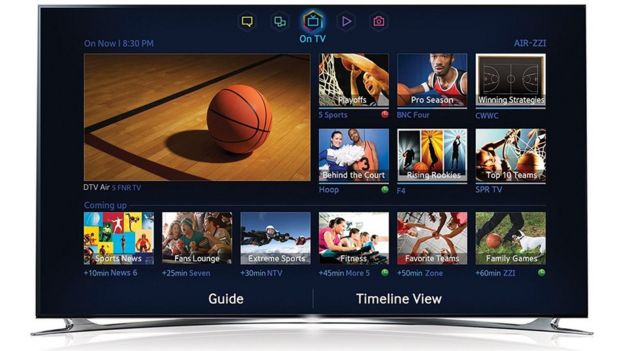 Samsung has not commented on the allegations.

Wikileaks also claims that as of last year, the CIA has built up an arsenal of 24 Android “zero days” – the term given to previously unknown security flaws in code.

Some of these are said to have been discovered by the CIA, but others were allegedly obtained from the UK’s GCHQ agency as well as the NSA and unnamed third-parties.

Devices made by Samsung, HTC and Sony, among others, were said to have been compromised as a result, allowing the CIA to read messages on Whatsapp, Signal, Telegram and Weibo among other chat services.

It is also claimed that a specialised CIA unit was set up to target iPhones and iPads, allowing the agency to see a target’s location, activate their device’s camera and microphone, and read text communications.

The unit is also reported to have made use of further iOS “zero days” obtained from GCHQ, the NSA and FBI.

“Furthermore, all of GCHQ’s work is carried out in accordance with a strict legal and policy framework, which ensures that our activities are authorised, necessary and proportionate.”

Other claims say the CIA:

Wikileaks describes its release as the first in a series of planned leaks about the CIA’s cyber-activities, which it refers to as Vault 7.

It added that the material had already circulated among hackers who used to work for the US government as well as contractors in an unauthorised manner.

There is a huge amount of information in the CIA data dump but a lot of it, such as its apparent success in compromising smart TVs, is not that surprising. Lone researchers have managed similar hacks, so smart government agents were always going to be able to go further.

Plus, we kind of know that a lot of the modern internet-of-things gear is broken as all kinds of holes have been found in all kinds of gadgets – including cars.

What’s more interesting is the work said to have been done on iPhone and Android handsets. That’s because Apple works hard to make sure iOS is secure and Google has made a real effort lately to secure its operating system. For a spy agency, access to those gadgets is key because they travel everywhere with a target.

What is likely to hit the CIA the hardest is losing control of all the zero day exploits and malware detailed in the papers.

It is more than likely that the agency paid millions to build up an arsenal of tools that are guaranteed to work – largely because they are based on flaws, bugs and vulnerabilities that have never been seen before. Operating systems of all stripes are really big haystacks and the information in some of the leaks looks like a good map to all the needles hiding within.

With the zero days now largely burned the CIA may have to re-trench for a while but it will doubtless have other unused attack tools stored and ready to deploy.

What’s potentially more worrying is that as information about the bugs gets out then the bad guys will pile in and use them.

We saw that with the zero days released in the much smaller Hacking Team data breach, and there is much more useful data to be found in this trove.

About World Justice News 2862 Articles
Brings you breaking crime news and other interesting crime stories from around the world.

A man has gone on trial in London, accused of plotting to kill a Pakistani blogger living in the Netherlands. A court heard that 31-year-old Muhammad Gohir Khan was hired as a “hitman” by figures […]

Julian Assange can be extradited to the US, court rules

Wikileaks founder Julian Assange can be extradited from the UK to the US, the High Court has ruled. The US won its appeal against a January UK court ruling that he could not be extradited […]