Files on 23 people and organisations involved in the 1989 Hillsborough disaster have been passed to the Crown Prosecution Service (CPS).

An inquests jury concluded last April that the 96 victims of the FA Cup semi-final tragedy were unlawfully killed.

Prosecutors will now decide whether to bring criminal charges against the unnamed 23.

Lawyer Elkan Abrahamson, director of Broudie Jackson Canter, which represents 20 of the Hillsborough families, said: “Our clients are relieved that files have finally gone to the CPS to consider criminal proceedings against 23 individuals and organisations.

“Given that the CPS have been working in tandem with the police and the IPCC for many years, we believe decisions should now be taken without further delay.

“We will continue to scrutinise the process and any decisions.”

The announcement follows the conclusion of two criminal investigations – ordered in 2012 following the publication of the Hillsborough Independent Panel report – by Operation Resolve and the Independent Police Complaints Commission (IPCC).

Operation Resolve examined events up to and including the day of the disaster, including the police planning and preparation, ground design and the emergency response.

The IPCC focused on the conduct of both South Yorkshire Police and West Midlands Police and allegations of a cover-up in the days and weeks that followed the tragedy.

Fifteen of the 23 suspects relate to Operation Resolve and eight to the IPCC investigation, but the names of individuals and organisations named in the files passed to prosecutors have not been made public.

Some of those previously named as suspects have died and cannot therefore be prosecuted.
Charges being considered include:

The CPS will also consider “any other relevant offences” on the evidence presented by both investigation teams, the IPCC said.

More than 170 allegations of police misconduct continue to be investigated by both the IPCC and Operation Resolve.

Families of those who died in the Sheffield tragedy have campaigned for more than 25 years to have individuals or public bodies held to account.

Giving evidence at the Hillsborough Inquests, former South Yorkshire Ch Supt Duckenfield accepted his failure to close a tunnel was the “direct cause of the deaths of 96 people”.

In a recent book, Sir Norman Bettison revealed he was being treated as a suspect by the IPCC in mid-2015.

Sir Norman, who was part of a police team that gathered Hillsborough evidence for use at a public inquiry, was Chief Constable of Merseyside Police from 1998 to 2004 and chief constable of the West Yorkshire force until he resigned in 2012.

At the inquests, he said he was not part of a “black propaganda unit” set up to blame Liverpool fans.

It is not known whether his name has been put forward for a charging decision.

The IPCC probe is the biggest criminal investigation into alleged police misconduct ever conducted in England and Wales.

It is understood the CPS may take up to six months to consider all the evidence.

IPCC deputy chair Rachel Cerfontyne said: “Conducting an inquiry of this scale and complexity, while supporting the longest running inquests in British legal history, has been a significant undertaking for the IPCC. Our criminal investigation has now substantially concluded.”

For years, the friends and families of the 96 Hillsborough victims have campaigned for individuals and corporate organisations to be held accountable.

In 1990, Lord Justice Taylor’s report following the public inquiry into the disaster stated that “a failure of police control” was the main cause.

But the Director of Public Prosecutions in England and Wales decided there was no justification to bring any prosecutions.

A year later, after accidental death verdicts were recorded, the families vowed to campaign for fresh inquests.

In 1997, after reviewing fresh evidence, Lord Justice Stuart-Smith said there was no such justification for a new inquiry.

But the families’ quest for justice never ceased and was boosted in 2009 when the government agreed that all evidence relating to Hillsborough must be disclosed by all organisations involved.

The results were made public by the Hillsborough Independent Panel (HIP) in 2012, paving the way for the fresh inquests in the spring of 2014.

Last year the inquest jury concluded that the 96 fans had been unlawfully killed and exonerated fans of any blame.

The HIP report also led to the Operation Resolve and IPCC investigations. 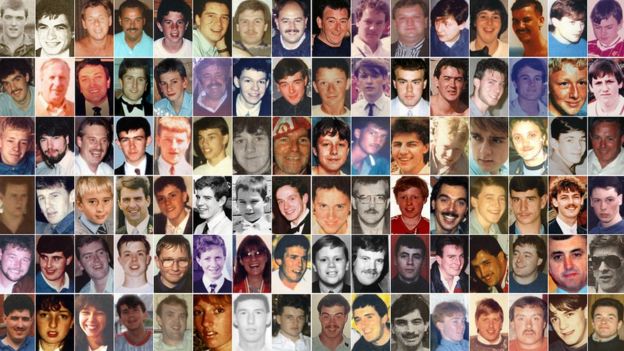 Read profiles of all those who died in the disaster

About World Justice News 2748 Articles
Brings you breaking crime news and other interesting crime stories from around the world.

The Crime of the Aberfan Disaster

One hundred and forty four people died in the Aberfan disaster 50 years ago this week—including 116 children. Yet no one has been held accountable. This was not simply an awful accident. It flowed from a […]

The future of international justice

By James Robbins – BBC Diplomatic correspondent The International Criminal Tribunal for the former Yugoslavia is shutting down at the end of 2017, having brought to justice some of those who committed war crimes in the […]

A woman has been ordered by a sheriff to pay a private parking company £24,500 in unpaid parking charges. Carly Mackie ignored hundreds of penalty notices for parking at Dundee’s Waterfront without a permit, claiming […]