Two students have been killed and three others injured by a gunman who opened fire at a secondary school in California, officials say.

The shooting took place at the Saugus High School in Santa Clarita, north of Los Angeles, minutes before the school day was due to begin.

A 16-year-old male suspect, who was also injured, was taken into custody.

Many US schools have implemented active shooter drills in recent years after fatal attacks around the country.

The shooting was first reported at 07:38 local time (15:38 GMT), LA county sheriff Alex Villanueva told a press conference. “Within seconds we received multiple [emergency] calls,” he said, adding that the first police units had arrived at the scene within two minutes.

Police found six people suffering from gunshot wounds and transferred them to local hospitals – and the suspect was later identified as one of those injured, Mr Villanueva said. 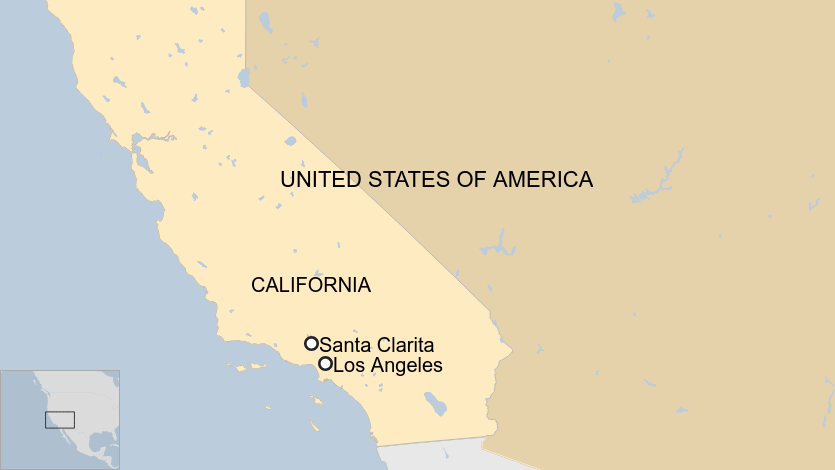 The suspect was “identified as a 16-year-old male whose birthday was today”, firearms expert Captain Kent Wegener said. He was named by US media as Nathaniel Berhow.

The Associated Press quoted a fellow student, Brooke Risley, as saying he was introverted but “naturally smart”, adding that he had a girlfriend and was a boy scout.

According to surveillance footage, the suspect took a gun out of his backpack and shot the five students, before shooting himself in the head, Mr Wegener said.

The weapon recovered was an emptied .45 calibre semi-automatic pistol, he added. Police said they had located the suspect’s home and would search it for evidence.

Saugus High School and other neighbouring schools were placed on lockdown during the shooting. The lockdown was lifted about three hours later.

LA undersheriff Tim Murakami wrote on Twitter that police would be interviewing all Saugus High School students before releasing them to their parents. He added that they would investigate rumours that the suspect had posted threats on social media.

One student told NBC she was doing her homework when people started running. “I was really, really scared. I was shaking,” she said.

Another student, named as Azalea, told CBS she and her classmates had barricaded the classroom door with chairs. “It was just really scary, having everybody panic and call their parents, saying they love you.”

News of the attack emerged during a Senate debate on gun control legislation. Senator Richard Blumenthal, a Democrat, was arguing for gun control when he was given a note with the news.

“We are complicit if we fail to act,” he said. “It is not just a political responsibility, it is a moral imperative.”

Gun control, and the right to bear arms, is a divisive political issue in the US. About 40% of Americans say they own a gun or live in a household with one, according to a 2017 survey, and the rate of murder or manslaughter by firearm in the country is the highest in the developed world.

According to the Washington Post, more than 230,000 young people in the US have experienced gun violence at school since the Columbine High School massacre in Colorado in 1999.

About World Justice News 2737 Articles
Brings you breaking crime news and other interesting crime stories from around the world.

A California baker can refuse service to same-sex couples over her religious objections and right to free speech, a Superior Court judge has ruled. A bakery owner’s lawyers argued that making the cakes violates her […]

California police have arrested a former police officer for a notorious spree of murders, rapes and burglaries in the 1970s and 80s. Sacramento police say they arrested suspect Joseph James DeAngelo, 72. The suspect has […]