A Canadian nurse who used insulin to kill eight elderly patients in Ontario care homes has been sentenced to life in prison, local media report.

Elizabeth Wettlaufer, 49, pleaded guilty earlier this month to killing five women and three men in two nursing homes between 2007 and 2014. 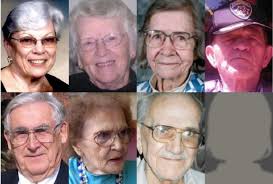 Wettlaufer was described by the judge on Monday as a “shadow of death” that passed over her victims, the Canadian Broadcasting Corp (CBC) reported.

She was told she may never be released.

“I caused tremendous pain and suffering and death,” Wettlaufer said after receiving her sentence, adding: “Sorry is much too small a word. I am extremely sorry.”

Ontario Superior Court Justice Bruce Thomas said Wettlaufer was a “predator” who took the lives of those she was supposed to protect and care for during her time as a nurse, CBC reports.

Many of the victims’ relatives were present in the courthouse for Wettlaufer’s sentencing and were told by the judge to take their time when reading their victim impact statements.

Friends of the some of the victims also gathered outside the courthouse in Woodstock, Ontario, on Monday to express their hurt and anger.

“I think she should spend the rest of her life in a small box contemplating what she’s done,” said Laura Jackson, a friend of Maurice Granat, one of the victims.

Arpad Horvath, whose father was also killed by Wettlauffer while in her care, said the former nurse’s statement in court only made him angry.

“An apology like that is just a waste of time, paper and air,” he said.

Police launched an investigation into the nursing home deaths in September.

Wettlaufer resigned from the College of Nurses of Ontario a day after that, and was arrested in October.

In January, police brought six additional charges – four counts of attempted murder and two counts of aggravated assault – against Wettlaufer for other incidents that took place in care homes between 2007-16. ​

June 25, 2007 – Dec. 31, 2007: Wettlaufer injected 87-year-old Clotilde Adriano with insulin at the Caressant Care long-term-care home in Woodstock, Ont., committing what police called an aggravated assault. Adriano died on July 30, 2008, at the age of 88. Police said her death is not attributed to Wettlaufer. Adriano was a widowed mother of two and grandmother to five. She died at the Caressant Care home where her sister – another victim – was also living.

June 25, 2007 – Dec. 31, 2007: Wettlaufer injected Albina Demedeiros with insulin at Caressant Care, committing what police have called an aggravated assault. Demedeiros died in hospital on Feb. 25, 2010, her 91st birthday. Police said her death was not attributed to Wettlaufer. Demedeiros was predeceased by nine of her 10 siblings, including victim Clotilde Adriano.

Aug. 11, 2007: Wettlaufer used insulin to murder James (Jim) Silcox at the Caressant Care home. The 84-year-old was a Second World War veteran of the Royal Canadian Army Service Corps. He was a married father of six.

Dec. 22, 2007 – Dec. 23, 2007: Wettlaufer killed Maurice (Moe) Granat with insulin at the Caressant Care home. The 84-year-old father of two was a longtime mechanic and automotive body man in Tillsonburg, Ont.

Jan. 1, 2008 – Dec. 31, 2009: Wettlaufer injected Caressant Care resident Michael Priddle, 63, with insulin “with intent to murder.” Priddle died at the home at the age of 64, with his family by his side, at an undisclosed date. Police have said his death is not attributed to Wettlaufer. Priddle was survived by his wife of 41 years as well as two children.

Sept. 1, 2008 – Dec. 31, 2008: Wettlaufer injected Caressant Care resident Wayne Hedges with insulin “with intent to murder.” The 57-year-old Hedges died at the long-term care home on Jan. 24., 2009. Police say his death is not attributed to Wettlaufer. Hedges was survived by his parents and two siblings and predeceased by a brother.

Oct. 13, 2011 – Oct. 14, 2011: Wettlaufer killed 87-year-old Gladys Millard with insulin at the Caressant Care home. Millard, a widowed mother of two, was originally from Nova Scotia. She was a longtime member of Knox Presbyterian Church and a member of the Rose Rebekah Lodge in Woodstock.

Aug. 23, 2014 – Aug. 31, 2014: Wettlaufer used insulin to kill 75-year-old Arpad Horvath. He lived at a Meadow Park facility in London, Ont. The married father of two was the owner of Central Tool and Die of London and active in the local Hungarian club.

Aug. 1, 2016 – Aug. 30, 2016: Wettlaufer injected 68-year-old Beverly Bertram with insulin “with intent to murder” while the woman was living at a private residence in Ingersol, Ont.

Oct. 25, 2016 – Wettlaufer is charged with eight counts of first-degree murder.

Jan. 13, 2017 – Wettlaufer is charged with four counts of attempted murder and two counts of aggravated assault.

June 1, 2017 – Wettlaufer pleaded guilty to all charges she faced.

June 26, 2017 – A sentencing hearing is held for Wettlaufer in Woodstock, Ont.

The Canadian pirate site blocking proposal threatens net neutrality, the Canadian House of Commons Standing Committee on Access to Information, Privacy and Ethics warns. In a report that’s supported across the political spectrum, the committee […]

A wanted man has turned himself in after Canadian police arrested four others in connection with the March abduction of a 14-year-old boy. Solaiman Nassimi, 29, appeared in court on Friday after surrendering Thursday. According […]

Fertility doctor loses licence after using his own sperm

A Canadian medical regulator has formally revoked the licence of a retired fertility doctor who used his own sperm to inseminate patients. The College of Physicians and Surgeons of Ontario called Norman Barwin’s actions “beyond […]