A Federal High Court in Nigeria’s capital, Abuja, has ordered the security police to ensure that separatist leader Nnamdi Kanu gets “maximum comfort” while in their custody on treason and other charges.

The order followed a complaint by his lawyers, during a pre-trial hearing today, that their client was not allowed to change clothes or even practise his religion.

The emergency hearing followed arguments by his lawyers that the earlier adjournment of the case was against the his right to a speedy trial. Mr Kanu was not brought to court.

He heads the Indigenous People of Biafra (Ipob) group which has been agitating for the secession of south-eastern Nigeria.

The trial has been adjourned to 18 January next year.

In response, the president said it was a difficult request but he would give it some consideration.

The last time he was freed, Mr Kanu jumped bail after accusing the Nigerian army of attempting to kill him.

He was re-arrested in June after being repatriated from an undisclosed country.

His lawyers and family members alleged he was detained and mistreated in Kenya before being taken to Nigeria, though Kenya has denied involvement.

The arrest of Nnamdi Kanu has dealt a serious blow to his group, and could even spell the end of his movement.

The leader of the Indigenous People of Biafra (Ipob), a group that wants a breakaway state in south-east Nigeria, remains a cult hero to his hundreds of thousands of followers.

For more than a decade, his fiery radio broadcasts and social media posts were thorns in the side of the Nigerian government but his transition to an armed struggle in 2020 was seen as a step too far.

The armed wing of Ipob – the Eastern Security Network – has been accused of killing at least 60 people in recent months, most of them police officers, although the group denies the allegations.

Mr Kanu’s arrest is seen as the final act by a government determined to quell the uprising.

The images of his arrest, more than anything else, would have seriously undermined the confidence of even his staunchest supporters.

It was not the first time the 53-year-old Jewish convert has been paraded in handcuffs, but unlike previous occasions his customary defiance was missing. His days-old grey beard gave him a dishevelled look that not even his Fendi designer clothes could mask.

Mr Kanu was said to have turned the organisation into a one-man show, alienating some of his most trusted followers, and so there is now a leadership vacuum.

“Money disputes and accusations that he didn’t consult key stakeholders over the formation of an armed wing did not go down well with many,” said the BBC Igbo’s Chiagozie Nwonwu, who interviewed Mr Kanu in 2019 while in exile.

One of those who fell out with Mr Kanu and left the organisation last year was his former deputy, Uche Mefor, a respected member of the group who took over when the leader was previously incarcerated.

Allegations of misappropriation of donated funds have also led to the exit of loyal supporters in the US and UK.

Locally, the spine of the movement is also gone, as battle-hardened members have either been killed or arrested by Nigeria’s security forces.

Mr Kanu was seen by many as a dangerous propagandist, but he was also considered a lightning-rod for the discontent many Igbos still feel about Nigeria, decades after a three-year civil war between 1967 and 1970.

Many Igbos feel sidelined in Nigerian politics and there are cries of marginalisation.

Nigeria’s third-largest ethnic group, they are yet to produce a president since the 1960s and accuse the federal government of neglecting their region. 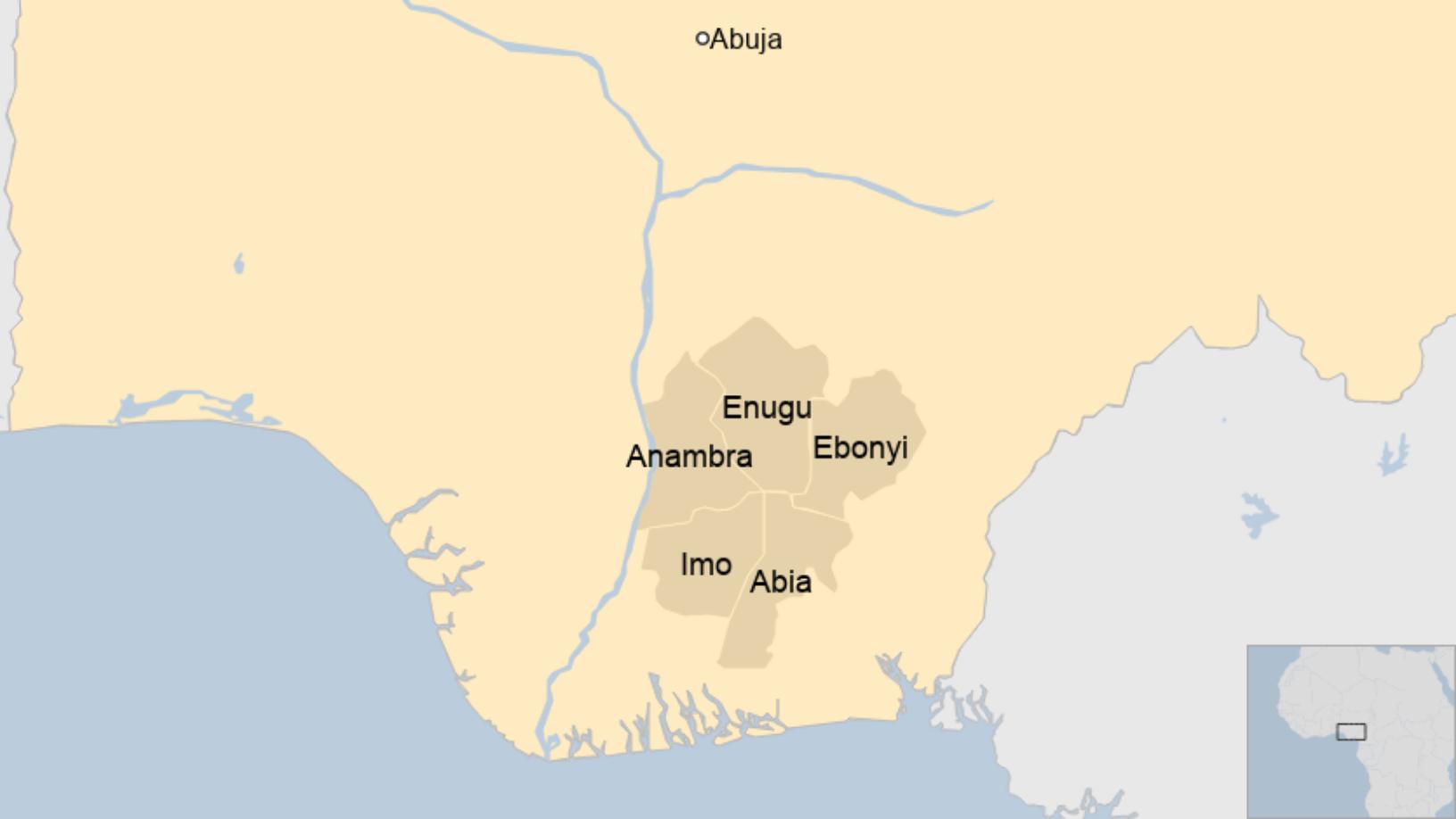 These feelings have heightened since President Muhammadu Buhari came into power in 2015, and his rhetoric has not helped.

He recently referenced the civil war while vowing to crush Ipob, prompting Twitter to delete his tweet, and in the past said those who gave him 5% of votes [such as the south-east] should not expect to be treated same as those that gave him 95%.

Such comments helped propel Mr Kanu, a largely obscure figure despite his radio broadcasts, to fame.

Any other president might have ignored him but not Mr Buhari, a stoic former military general famous for suffering no indiscipline even from civilians when he ruled in the 1980s.

Mr Kanu was arrested in 2015 when he returned to Nigeria but this only boosted his profile.

The man who had been dismissed as a rabble-rouser by many Nigerians, even within his ethnic group, became the most talked about Igbo person.

Those who know him say it was the sort of attention he had been craving and once released on bail in 2017 he never looked back.

He formed the Biafran Security Services (BSS), a mock militia that dressed in black and held parades in the eastern city of Abia, his home state.

His diatribes increased, accusing the president of harbouring plans to Islamise Nigeria and saying that President Buhari had been replaced by an impostor – Jubril from Sudan.

Mr Buhari felt he had seen enough and after a court proscribed Ipob as a terrorist organisation, the army went in, carrying out an attack on Mr Kanu’s home in September 2017.

Many thought that was the end, but he reappeared in Europe in 2018 and the radio broadcasts resumed, this time latching on to Nigeria’s farmers-herders crisis to fan ethnic tensions in the country.

Last year, Mr Kanu saw an opening in the #EndSars protests against police brutality but many believe this was actually the start of his downfall.

As thugs hijacked the demonstrations across Nigeria, Mr Kanu ordered his supporters to attack police stations.

For someone that had openly been against an armed struggle in the early days of Ipob, it is hard to know what changed.

Many suspect that the 2017 attack on his house and death of members influenced his decision to arm the group.

In late 2020 he resurrected the BSS and rechristened it the Eastern Security Network (ESN).

While BSS was a mock militia, the ESN was closer to the real deal.

Members, dressed in black attire and red berets, were trained in the south-east’s forests, there was a chain of command, and more importantly they had AK-47 rifles which had been stolen from police stations.

Between September 2020 and May 2021, there was a wave of attacks on police stations and other public facilities in the south-east which authorities blamed on Ipob.

In March, the army went in and began taking out ESN camps and commanders, turning the region on its head.

For most people, especially young people sympathetic to the Ipob cause, the army operation was an eye-opener about what war looked like.

Businesses were closed, curfews imposed and people walked with their hands above their heads when they approached army checkpoints.

At this point, sentiments started to turn against Ipob and its leader and with his arrest, he joins other Igbo separatists who have lost against the Nigerian state.

But he is unlikely to be the last until the root causes of the grievances felt by many living in south-eastern Nigeria are addressed.

Nigeria jailbreak in Kabba: Prisoners on the run after armed raid

Some 240 prisoners have escaped after unidentified gunmen attacked a facility in Nigeria’s Kogi state, officials say. It is the second mass jailbreak this year in Nigeria, which is struggling with multiple security crises. The attackers […]

The UK has promised to return to Nigeria £4.2m ($5.8m) which was stolen by a former governor. Former Delta State Governor James Ibori was convicted of money laundering in the UK in 2012. He is […]

Seven suspects have been detained after a suspected hijacking involving stowaways on a tanker off the Isle of Wight. UK special forces completed the operation in nine minutes, BBC Defence Correspondent Jonathan Beale said. Military […]