A suspect is in custody after one person was killed and 12 others were injured in eight different locations throughout West Valley cities in the Phoenix metropolitan area on Thursday.

One person was killed and 12 others injured in reported drive-by shootings over a 90-minute span Thursday in Peoria, Glendale and Surprise, authorities said.

Four people were shot, with one of those shootings being fatal.

The other victims had a range of injuries such as shrapnel from broken glass or injuries related to a car crash, Peoria police spokesman Brandon Sheffert said at a news conference Thursday afternoon.

A suspect was in custody and authorities said a weapon was found in his vehicle. But it remained unclear if the man was responsible for all of the shootings.

The deceased victim, who had not been identified, was found on the Loop 101 and Thunderbird. The freeway was closed while police investigated, but it has since reopened.

There were eight different shooting scenes, and the spree occurred over the course of 1.5 hours, Peoria Police say. At least four of the scenes were in Peoria and two were in Surprise.

The incident began when a drive-by shooting was reported near 103rd Avenue and Northern to Peoria Police Thursday afternoon. When they arrived, they found an adult inside of a car with a gunshot wound.

Witnesses identified the car as a white Volkswagen Tiguan, which had already fled the scene.

During the investigation, multiple shootings were reported across the West Valley, and Peoria officers provided information on the vehicle description to multiple police agencies in the area.

A member of Surprise Fire and Medical had spotted a car matching the description near 147th Avenue and Grand and notified police.

An investigation determined that the suspect had been involved in at least eight other incidents in Peoria, Glendale and Surprise near the following locations: 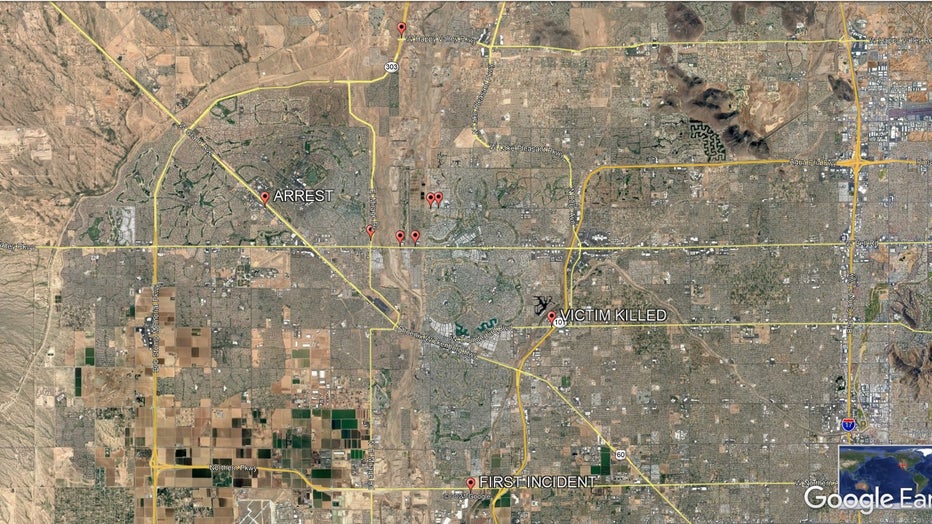 A map showing where all of the shootings occurred.

According to the Peoria Police Department, the suspect, identified only as an adult male, was taken into custody in Surprise in connection to the shootings.

Officials at Banner Health said they received nine patients at three of their hospitals. But the extent of the victims’ injuries and their conditions were not immediately released.

Police say there is no current threat to the community.

Anyone with additional information is asked to contact Peoria Police at 623-773-8311 or Silent Witness at 480-WITNESS.

Viewer video appears to show the moments when it ended and a suspect was taken into custody near 147th Avenue and Grand.

One victim is speaking out after he says he was dangerously close to losing his life.

“Yeah, I don’t even know the guy,” said Richard Valencia. “It was completely random.”

Valencia spoke out after being discharged from Banner Del Webb Hospital. His left arm was bandaged after suffering a gunshot wound.

He says he was talking from the QuikTrip near 114th Avenue and Bell Road when someone in a white SUV started firing shots at him.

“The guy shot me,” Valencia said. “He was in a white vehicle, I heard four or five shots. After I felt the shot, I pulled mine out, let three off back at him.”

Valencia says he called his mother immediately and spent the afternoon in the hospital.

“I got hit once in the shoulder basically, and it went out this way,” he explained. “Didn’t hit any vital organs or any vital nerves or anything like that – went straight through in and out.”

He says he’s relieved the suspect is in custody, but is saddened by the number of people injured and the loss of someone’s life.

“A centimeter over and I wouldn’t have been standing here with you talking,” Valencia said.

Pastor Neil Betrue captured video outside Church of the Nations in Surprise as police arrested a suspect in a drive-by shooting spree.

“Heard the helicopter overhead, saw a bunch of police officers in the parking lot, looked out, saw police officers forcing everyone to get back in their businesses,” Betrue said.

The shootings led to numerous road closures, backing up traffic in the West Valley for hours.

“Because of road closures, there were cars backed up as far as I could see in both directions,” said Ariana Newton.

Newton says she and her daughter went home as soon as she learned there was a shooter on the loose.

The suspect ended up being arrested right down the street from their house.

“I’ve heard about it on the news cause there are a lot of mass shootings, but you never think it is going to be so close to your house,” Newton said. “It could’ve been me, could’ve been you.”

As for Pastor Betrue, he says his thoughts tonight turn to the victims and their families.

“Of course my heart breaks for the families,” Betrue said. “The victims – we are praying for them.”

The Surprise Police Department tweeted earlier that a suspect was on the loose following a shooting near 115th Avenue and Bell Road.

Police have arrested and charged a man following a string of five shootings – all targeting homeless people as they slept. Gerald Brevard III, 30, allegedly struck five times in nine days in both New […]

Two Canadians have been shot dead and another injured after a dispute among guests at a hotel resort near Cancún, Mexico, local security officials say. Gunfire erupted on Friday at the Hotel Xcaret Mexico in […]