It was a getaway attempt worthy of Ian Fleming, but in the end, a suspected US fraudster proved he was no James Bond.

Matthew Piercey, 44, a California man accused of financial crimes, briefly evaded justice when the FBI tried to arrest him on Monday morning.

He first fled by car and then used a sea scooter to hide from agents underwater in a frigid lake.

Agents watched his bubbles on the surface for around 25 minutes before he emerged and was handcuffed.

Sea scooters, also known as diver propulsion vehicles, are underwater devices that can pull a person wearing scuba gear. They were used for the underwater battle in the 1965 James Bond film Thunderball and have been employed by real-life militaries around the world.

Officials said that when they moved in to arrest Mr Piercey he fled in a pickup truck, twice driving off the road. He was then seen jumping in to the lake near the city of Redding with a strange device in his hand.

Police later learned that the model he used, a Yamaha 350Li, can reach speeds of 4mph (6.5km/h) and can travel 100ft underwater. 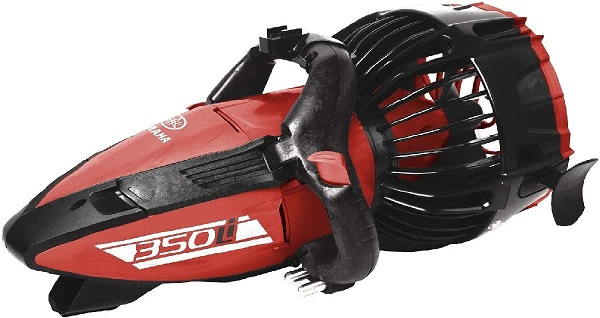 “You never know what is going through someone’s mind when they’re being pursued by the FBI,” said lawyer Josh Kons, who is representing several victims of the alleged fraud.

“And we kept investigating, and all of a sudden today, here he is trying to escape into a lake, using a submersible device.”

After Mr Piercey emerged, police medics examined him for hypothermia and gave him dry clothes they had collected from his wife, according to the Sacramento Bee news website.

Investigators say that he and his business partner Kenneth Winton used funds invested in their companies, Family Wealth Legacy and Zolla, to pay for personal expenses, and that few liquid assets remained for them to return to clients.

Mr Piercey is charged with wire fraud, mail fraud, money laundering, and witness tampering and is facing 20 years in prison.

Prosecutors have also deemed him a flight risk.

A California woman has pleaded guilty to faking her own high-profile kidnapping and lying to authorities in 2016. Sherri Papini, 39, vanished while running near her home, only to reappear three weeks later on Thanksgiving. […]

Ex-US President Donald Trump has asked the Supreme Court to intervene in the dispute over sensitive documents seized by the FBI during a search of his Florida estate in August. Mr Trump wants the justices […]

Amber Heard has filed an appeal against her ex-husband Johnny Depp’s US libel lawsuit win. Following a trial lasting several weeks earlier in the year, a jury in Virginia found in favour of Depp, ruling that a […]