Two Los Angeles police officers are recovering in hospital after being shot in what police are calling an ambush.

Video of the incident shows a figure approach the officers’ vehicle, before opening fire and running away.

The Los Angeles County Sheriff’s Department has announced a $100,000 (£78,000) reward for any information leading to the gunman’s arrest.

Almost 40 US police officers were killed in the line of duty in 2020, FBI statistics show – eight of them were victims of an ambush.

Protesters shouted anti-police slogans and blocked the entrance to the emergency room where the two officers were being treated, police and witnesses said.

Two people were arrested, including a journalist who police said tried to interfere with the arrest of the other detainee and did not identify herself as a member of the press.

The reporter, Josie Huang, tweeted she had “thoughts and videos” to share, while her employer, NPR, said they were “appalled” by her arrest.

The officers involved in the shooting have not been named but were described as a 31-year-old woman and a 24-year-old man.

The female officer was shot in the jaw and arms and was in a critical but stable condition after undergoing surgery, authorities said on Sunday. The male officer was hit in the forehead, an arm and a hand and was described as alert, ABC News reported. 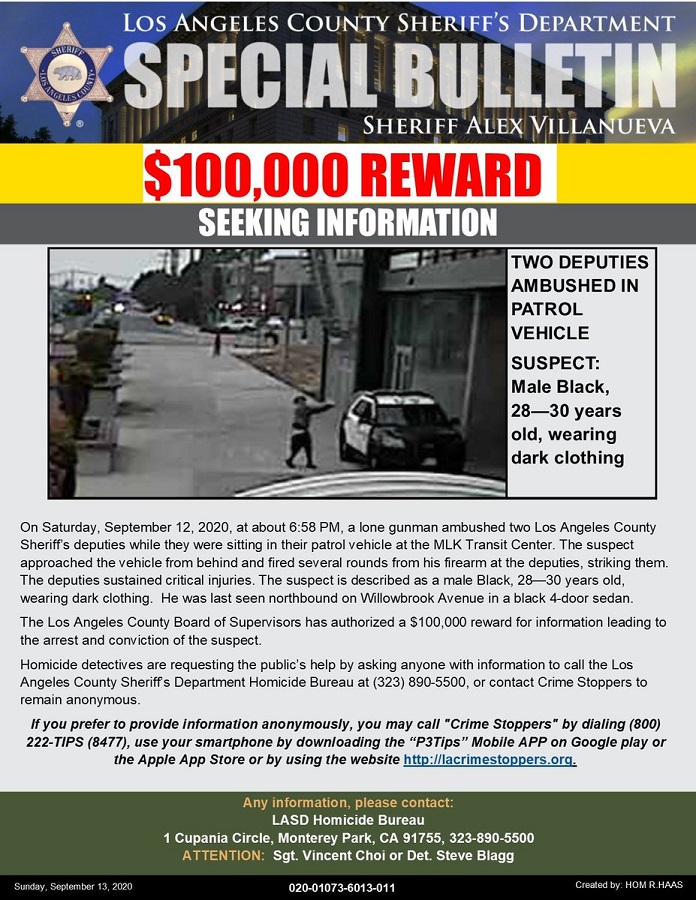 “This is just a sombre reminder that this is a dangerous job. Actions, words have consequences and our job does not get easier because people don’t like law enforcement,” Sheriff Villanueva said.

Both candidates in this year’s presidential election weighed in on the shooting.

Sharing the footage of the incident, US President Donald Trump, tweeted: “Animals that must be hit hard.”

His Democratic rival, Joe Biden, said he was praying the officers recover.

“This cold-blooded shooting is unconscionable and the perpetrator must be brought to justice,” he tweeted. “Violence of any kind is wrong; those who commit it should be caught and punished.”

About World Justice News 2708 Articles
Brings you breaking crime news and other interesting crime stories from around the world.

Basketball player Tyler Honeycutt has died after a shootout with US police, local media report. The Los Angeles Police Department said an unnamed suspect appeared to have died of a “self-inflicted gunshot”, after reportedly firing […]

Police were called shortly after 3am on Saturday, November 5, to reports of shots fired in Muswell Hill, north London. Armed officers attended the scene and gang crime police launch an investigation as the man […]

Los Angeles rapper Nipsey Hussle has been shot dead outside his clothing shop, US media report. The 33-year-old was shot a number of times, and was pronounced dead on arrival at hospital, the Los Angeles […]