Democrats have vowed to continue pursuing Donald Trump over allegations he obstructed justice, following the release of a report into Russian meddling in the 2016 election.

They want Robert Mueller, the man who collated the report, to publicly testify before congress about the work he has done.

It comes after a redacted version of the document was released on Thursday.

But while the report does say the president did not collude with the Russians, it did not come to a firm conclusion on the issue of obstruction of justice.

It also reveals several occasions when Mr Trump tried to hinder the investigation itself – including attempting to have Mr Mueller removed.

The 448-page redacted document is the result of a 22-month investigation by Mr Mueller, who was appointed to investigate alleged Russian interference in the 2016 election and possible collusion with the Trump campaign.

What’s in the report?

Mr Mueller’s report says he found no criminal conspiracy between Mr Trump’s campaign and Russia, but could not reach a concrete legal conclusion on whether Mr Trump tried to obstruct the investigation.

“If we had confidence after a thorough investigation of the facts that the president clearly did not commit obstruction of justice, we would so state,” the report says. “Based on the facts and the applicable legal standards, we are unable to reach that judgement.

“Accordingly, while this report does not conclude that the president committed a crime, it also does not exonerate him.”

What do Democrats say?

Democrat congressional leaders Nancy Pelosi and Chuck Schumer in a joint statement said the report painted a “disturbing picture of a president who has been weaving a web of deceit, lies and improper behaviour”.

The party has begun moves to try to obtain the full, unredacted document and to have Mr Mueller testify before Congress.

Congresswoman Jackie Speier told the BBC that Mr Mueller had “basically tossed the ball to Congress and said, ‘you need to pursue obstruction of justice here’.”

We cannot take Attorney General Barr’s word for it. We must read the full Mueller report, and the underlying evidence. This is about transparency and ensuring accountability.

It is clear Congress and the American people must hear from Special Counsel Robert Mueller in person to better understand his findings. We are now requesting Mueller to appear before @HouseJudiciary as soon as possible. 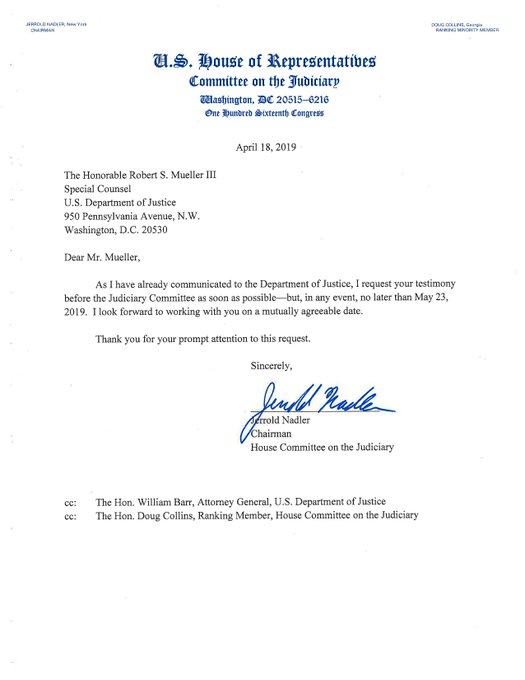 Democrats have also attacked US Attorney-General William Barr, accusing him of “misleading” them with an earlier summary of the report’s findings regarding whether Mr Trump obstructed justice.

Mr Barr held a news conference before the report was made public in which he backed the president.

The report has long been viewed as a potential tool to impeach the president but the House Majority Leader Steny Hoyer said this would not be “worthwhile at this point”.

“Very frankly, there is an election in 18 months and the American people will make a judgement,” he told CNN.

How has Mr Trump responded?

Speaking at an event for veterans, Mr Trump said he was having a “good day” – adding that there was “no collusion” and “no obstruction”.

Representatives for the president have also reiterated his view that the investigation was a “hoax” and called for reprisal inquiries.

“President Trump has been fully and completely exonerated yet again,” Mr Trump’s 2020 campaign manager Brad Parscale said in a statement.

“Now the tables have turned, and it’s time to investigate the liars who instigated this sham investigation into President Trump, motivated by political retribution and based on no evidence whatsoever.”

His comments followed a stream of social media posts by the president on Thursday regarding the report’s release.

In one tweet, he said he had the right to “end the whole witch hunt” and fire Mr Mueller had he wanted to.

How have the Russians reacted?

Russia has dismissed the findings of the report, with Kremlin spokesman Dmitry Peskov saying it contained “no new information”.

“As a whole the report as before does not present any reasonable proof at all that Russia allegedly meddled in the electoral process in the US,” Mr Peskov told reporters on Friday.

I think that the wider strategy of the Democrats is that they would like to see a president going into 2020 a bit wounded, a bit weakened.

The danger of going down the impeachment route is that all that it results in is uniting the Republican party.

For that reason I think the Democratic leadership would much rather knock the president around a bit than go down a route which would almost certainly end in failure and almost certainly be counter-productive.

And for all the questions, doubts, contradictions, sleights of hand, Mr Trump emerges with two key headlines: Mueller says there was no collusion; the attorney-general says there was no obstruction of justice.

Former US President Donald Trump and two of his children must answer questions under oath in a New York investigation into their business practices, a judge has ruled. New York’s attorney general has accused the […]

A US judge has held former President Donald Trump in contempt for failing to turn over files for an investigation into his business practices. Justice Arthur Engoron on Monday ordered Mr Trump pay a fine […]