It comes weeks after she was arrested over an alleged internet libel case.

Press freedom advocates say the veteran reporter is being targeted by President Rodrigo Duterte because of Rappler’s critical reporting on the government.

Eleven legal cases have been filed against the outlet since January 2018.

Ms Ressa, who was named one of Time Magazine’s People of the Year in 2018, spoke to reporters as she was arrested.

“Obviously this is yet another abuse of my rights. I am being treated like a criminal when my only crime is to be an independent journalist,” she said.

After her previous arrest on 13 February she spent a night in jail before being released on bail.

Ms Ressa was arrested moments after stepping off a plane from San Francisco, ABS-CBN, reported.

Before arriving, apparently aware that she might be met by police officers, she tweeted: “Landing in a short while to face my latest arrest warrant and the 7th time I will post bail.”

Landing in a short while to face my latest arrest warrant and the 7th time I will post bail. #HoldTheLine we pledge to not just hold power to account but I will mark every violation of my rights under the PH Constition (like harassment cases to try to intimidate @rapplerdotcom!)

The @OneFreePress Coalition will publish each month a “10 Most Urgent” list of journalists who have been jailed, threatened/attacked for their work. 1st list includes @rapplerdotcom‘s @mariaressa, women’s rights blogger @Saudiwoman &journalist @JulieDuque1 https://buff.ly/2YwDWAs 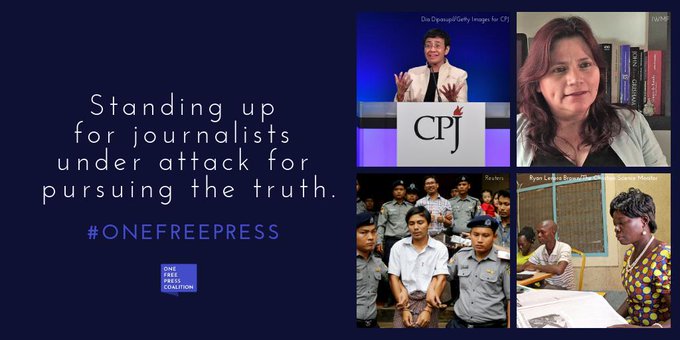 She then posted a series of tweets following her arrest, including a photograph from inside the police car.

Will they actually arrest me again?! @rapplerdotcom this is insane. Such violations of the Bill of Rights and the PH Constitution.

Later she tweeted again, writing: “Am posting bail for 7th time! For being a journalist.”

Why was Ressa arrested?

The government accuses Ms Ressa, who has both Philippine and American nationality, of having violated foreign ownership rules and committed securities fraud. According to Philippine law, media organisations must be completely Filipino-owned.

Rappler has denied government allegations that the website is being controlled by an organisation outside of the Phillipines, and press freedom organisations say the charges are designed to intimidate independent journalists.

Human Rights Watch said: “The court case is unprecedented and speaks volumes of the Duterte administration’s determination to shut the website down for its credible and consistent reporting on the government.”

In February, Ms Ressa was accused of “cyber-libel” over a report on a businessman’s alleged ties to a former judge. Two months earlier she had posted bail on tax fraud charges, which she described as “manufactured”.

If convicted of one count of tax fraud, she could serve up to a decade in prison. The cyber-libel charge carries a maximum sentence of 12 years.

The repeated arrests of Ms Ressa have drawn international condemnation and raised concerns about worsening press freedom in the country.

Rappler has reported extensively on President Deterte’s hardline war on drugs, in which police say around 5,000 people have been killed over the past three years. In December, the website reported on Mr Duterte’s public admission that he had sexually assaulted a maid.

Since 1986, 176 journalists have been killed in the Philippines, making it one of the most dangerous in the world for reporters. In 2016, the president was criticised for saying some of those journalists deserved to die.

Rappler was founded in 2012 by Ms Ressa and three other journalists and has gone on to become known in the Philippines for its hard-hitting investigations.

It is also one of the few media organisations in the country that is openly critical of President Duterte, regularly interrogating the accuracy of his public statements and criticising his sometimes deadly policies.

The president has banned its reporters from covering his official activities and last year the state revoked the site’s licence.

Ms Ressa is a veteran Philippine journalist who, before founding Rappler, spent most of her career with CNN – first as the bureau chief in Manila, and then in Jakarta. She was also the US broadcaster’s lead investigative reporter on terrorism in Southeast Asia.

Philippine President Rodrigo Duterte has said he might follow Russia’s example and withdraw from the International Criminal Court, where his critics say he could be charged over the thousands killed in his war on drugs. […]

At least 11 people have been found in a tiny dark room hidden behind a bookcase in a Philippine police station. The captives were discovered during a raid by the Commission on Human Rights (CHR), […]