The Russian operator of the YouTube-ripping sites FLVTO.biz and 2conv.com has scored an important legal win against several major record labels in the US. A Virginia federal court dismissed the piracy lawsuit after concluding that it doesn’t have personal jurisdiction over these types of sites if they are operated from abroad.

YouTube rippers are seen as the largest piracy threat to the music industry, and record labels are doing their best to shut them down.

In 2017, YouTube-MP3, the world’s largest ripping site at the time, shut down after being sued, and several other folded in response to increased legal uncertainty.

Not all stream-ripping sites throw in the towel without a fight though. FLVTO.biz and 2conv.com, owned by Russian developer Tofig Kurbanov, remained online despite being sued by several record labels last August.

Where other site owners often prefer to remain in the shadows, Kurbanov filed a motion to dismiss the case. According to the defense, the court has no jurisdiction over the matter. Only a small fraction of the visitors come from the US, and the site is managed entirely from Russia, it argued.

The RIAA labels, including Universal, Warner Bros, and Sony, clearly disagreed. In response, they argued that the operator of FLVTO.biz and 2conv.com downplays the connections to the US and Virginia. Therefore, he should stand trial there.

Yesterday, US District Court Judge Claude M. Hilton ruled on the matter. In a 14-page opinion, he clearly sides with the operator of the YouTube rippers. Kurbanov doesn’t have to stand trial in the US so the case was dismissed.

The ruling is merely about jurisdiction and doesn’t make an assessment of the alleged copyright infringements. The court carefully reviewed how the site operates and found no evidence that they purposefully targeted either Virginia or the United States.

The sites are available in the US and have plenty of visitors there, but that by itself is not enough.

“Even if the Websites’ servers knew exactly where the users were located, any interaction would still be in the unilateral control of the users as they initiate the contacts,” Judge Hilton’s opinion reads.

“As the Websites are semi-interactive, the interactions with the users are non-commercial, and there were no other acts by the Defendant that would demonstrate purposeful targeting, the Court finds that Defendant did not purposefully avail himself of the benefits and protections of either Virginia or the United States.

“The Court finds that exercise of personal jurisdiction over Defendant would be unconstitutional as a violation of due process…” Judge Hilton’s opinion adds, before dismissing the case.

In addition, the opinion stresses that without personal jurisdiction the record labels don’t have the option to refile the case in California or elsewhere in the US. 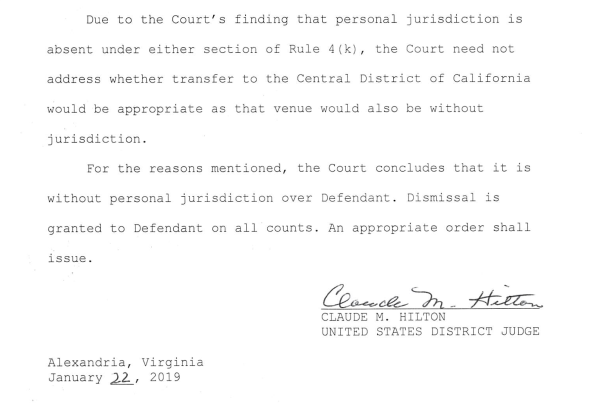 Val Gurvits, one of the attorneys who represented the site operator, is thrilled with the outcome. He believes this will also be beneficial to other foreign sites that offer similar functionality.

“This decision goes a long way towards curbing the copyright owners’ misuse of the US legal system to bully foreign website operators,” Gurvits informs TorrentFreak.

In many copyright-related cases, foreign defendants decide not to appear at all, but this case shows that fighting back can pay off.

“We are happy we were able to save our client from having to defend this action in a US court thousands of miles away from where the relevant business activities take place,” he adds.

The major record labels have yet to comment on the outcome. TorrentFreak reached out to the RIAA for a response, but we haven’t heard back thus far.

A copy of the memorandum opinion supporting the dismissal is available here (pdf).

Florida Governor Ron DeSantis has signed a first-in-the-nation bill that can penalise tech companies for deplatforming politicians. The legislation states that platforms can only suspend accounts for 14 days, and will be fined as much as […]

A new bill introduced by the Canadian Government proposes to ban the inclusion of settlement demands in the piracy notices ISPs are required to forward to subscribers. This practice is seen as an abuse of […]

Social networking giant Facebook must pay damages for failing to remove a link to a copyright infringing YouTube video, an Italian court has ruled. The case, which was filed by the Italian media conglomerate Mediaset, […]