The Attorney Discipline Probable Cause Committee issued an order of probable cause authorizing the State Bar of Arizona to initiate formal proceedings against attorney Juan Martinez.

The order was based upon some of the allegations raised in the initial bar charge submitted by Jodi Arias. Those allegations included that Mr. Martinez provided a third party confidential and/or sealed information including the identity of a juror in the Maricopa County Superior Court case of State of Arizona v. Jodi Arias, CR2008-031021.

In addition, the Committee found probable cause that Mr. Martinez provided false testimony or evidence during the State Bar’s discipline investigation regarding the nature of his relationship and conversations with third parties including a member of the media and a discharged juror.

Based on the order of the Committee, the State Bar intends to file a complaint alleging that Mr. Martinez violated Rule 42, Ariz. R. Sup. Ct., ER 3.4(c) by knowingly disobeying an obligation under the rules of a tribunal; ER 8.1(a) by knowingly making a false statements of material fact in connection with a discipline matter; ER 8.4(c) by engaging in conduct involving dishonesty, fraud, deceit or misrepresentation; and ER 8.4(d) by engaging in conduct prejudicial to the administration of justice. 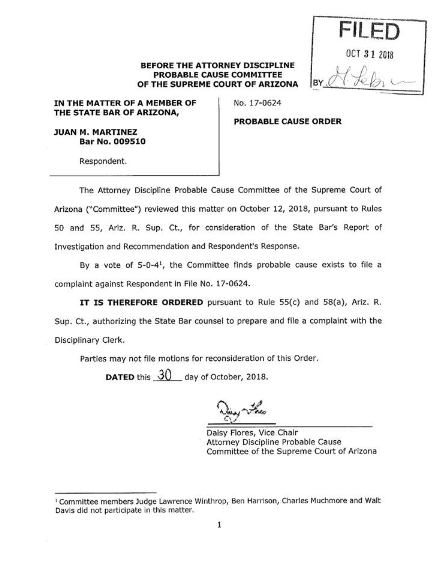 Police in Arizona have arrested a man after 183 animals, including dogs, cats and birds were found in his freezer. Michael Patrick Turland, 43, of Arizona, admitted freezing some of the animals while they were […]

A man in a pick-up truck drove into cyclists taking part in a charity bike ride in Arizona, leaving six of them in a critical condition. The incident happened at about 07:25 (14:25 GMT) in […]