Karma is a black bear, especially when you pepper spray him. 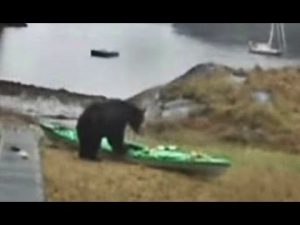 A woman in Alaska found this out the hard way, as seen on this video posted in September, 2015.

The woman, Mary Maley, explains that she was on a solo kayak trip and heard the bear rummaging around while she was eating lunch. Things start out okay, because the bear is leaving her kayak alone. She thanks him for that, and then she pepper sprays him in the face. He obviously does not enjoy that, so he retaliates by eating her kayak. Her desperate attempts to reason with the bear are to no avail.

Police may have unwittingly solved the mystery of a suspected serial killer after shooting dead a man who opened fire at officers in a chance encounter over an unpaid taxi fare. James Dale Ritchie’s weapon, […]

By EMILY CRANE FOR DAILYMAIL.COM An Alaska teenager allegedly killed her supposed best friend after a man she met online promised to pay her $9 million if she sent him photos and videos of the killing.  Cynthia […]

US man gets 30 years for murdering wife on ship

A man from Utah who killed his wife on a cruise ship in the US state of Alaska in 2017 has been sentenced to 30 years in prison. Kenneth Manzanares, 43, pleaded guilty last year […]