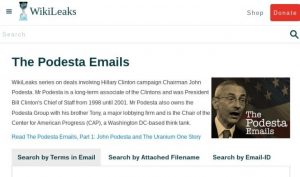 The recent leak of emails allegedly belonging to Hillary Clinton’s campaign chairman reveals a confidant’s frustration with the former secretary of state’s daughter, former President Bill Clinton “losing it” during a tough 2016 primary contest and a general coziness with numerous members of the media.

The trove of John Podesta’s emails from anti-secrecy group WikiLeaks so far has been published in three massive sections – released on Friday, Monday and Tuesday. Though more than 5,000 alleged Podesta emails already have been made public in the document dump, they’re a mere fraction of the 50,000-plus emails WikiLeaks claims to have.

Here are seven of the biggest revelations so far:

Top Bill Clinton lieutenant Doug Band, in an alleged 2011 exchange with Podesta, tore into Chelsea Clinton, who had apparently been raising questions about the company Band co-founded, Teneo.

“I don’t deserve this from her and deserve a tad more respect or at least a direct dialogue for me to explain these things,” Band wrote in November. “She is acting like a spoiled brat kid who had nothing else to do but create issues to justify what she’s doing because she, as she has said, hasn’t found her way and has a lack of focus in her life.”

Bill Clinton has long had a soft spot for New Hampshire, the state that made him the “Comeback Kid” and helped propel him to the Democratic nomination in 1992. So when it seemed on Feb. 7 that Hillary Clinton was set to lose the state’s primary by a large margin, Bill did not take the news well.

“He’s losing it bad today,” Bill Clinton chief of staff Tina Flournoy wrote. “I’m not with him. If you’re in NH please see if you can talk to him.”

Vermont Sen. Bernie Sanders went on to beat Clinton in the Granite State 60-to-38 percent on Feb. 9.

Neera Tanden, an activist and past adviser to Hillary Clinton, wrote to Podesta on Feb. 4: “What is wrong w the people of Nh?”

COZY WITH THE PRESS

The alleged Podesta emails show a particular level of comfort with certain members of the news media.

CNBC correspondent John Harwood emailed Podesta numerous times, on some occasions to request an interview and other times to offer advice. On May 8, 2015, Harwood wrote an email with the subject line “Watch out.”

“Ben Carson could give you real trouble in a general [election],” Harwood wrote before linking to video clips of an interview Harwood did with the former pediatric neurosurgeon.

In a July 2015 email, New York Times reporter Mark Leibovich emailed communications director Jennifer Palmieri several chunks of an interview he did with Hillary Clinton, and seemingly asked permission for the “option to use the following” portions. Palmieri suggested he cut a reference Clinton made to Sarah Palin and remove Clinton’s quote, “And gay rights has moved much faster than women’s rights or civil rights, which is an interesting phenomenon.”

In a January 2015 memo, former Politico reporter Maggie Haberman, who now works for The New York Times, was described as having “a very good relationship” with the campaign.

“We have had her tee up stories for us before and have never been disappointed,” the memo said.

Hillary Clinton allies were apparently hoping the Republican primary electorate would nominate Donald Trump as the GOP candidate for president.

Media commentator Brent Budowsky wrote to Podesta on March 13 that “Right now I am petrified that Hillary is almost totally dependent on Republicans nominating Trump.”

“…..even a clown like Ted Cruz would be an even money bet to beat and this scares the hell of out me…..” Budowsky wrote.

Campaign research director Tony Carrk emailed top Clinton advisers on Jan. 25 with some “flags from HRC’s paid speeches” that were given during the time between her tenure as secretary of state and when she announced her presidential candidacy. Clinton has not released transcripts of those speeches despite numerous calls from her primary and general election opponents.

Among the red flags is Clinton admitting she’s “Kind Of Far Removed” from middle-class struggles due to “The Economic, You Know, Fortunes That My Husband And I Now Enjoy.” That speech was delivered to employees at Goldman-Black Rock on Feb. 4, 2014.

In a line that came back to bite her in Sunday night’s presidential debate, Clinton discussed needing “Both A Public And A Private Position” during a speech for National Multi-Housing Council in April 2013.

In other speeches, Clinton boasts of her ties to Wall Street, admits she needs Wall Street funding and says insiders are needed to fix problems on Wall Street. Sanders was a particular critic of Wall Street and so-called “economic inequality” during his protracted primary campaign against Clinton.

In another speech, Clinton said her “dream is a hemispheric common market, with open trade and open borders.”

Throughout the alleged Podesta emails, aides debate tactics against Clinton’s main 2016 primary rival, Sanders. Carrk forwarded a 71-page, nearly 50,000-word opposition research file on Oct. 28, 2015, picking apart nearly every policy and position of Sanders. “Attached are some hits that could either be written or deployed during the next debate on Sanders,” Carrk wrote.

On Jan.6, campaign adviser Mandy Grunwald and Palmieri debated how to respond to Sanders’ attacks on Clinton’s ties to Wall Street.

“I liked messing with Bernie on wall street at a staff level for the purposes of muddying the waters and throwing them off their game a bit,” Palmieri wrote. “But don’t know that it is most effective contrast for her. Seems like we are picking the fight he wants to have.”

Grunwald replied: “Bernie wants a fight on a Wall Street. We should not give him one.”

An alleged email sent from Hillary Clinton’s account to Podesta on Aug. 17, 2014, noted that ISIS was receiving financial and logistical support from Saudi Arabia and Qatar.

“While this military/para-military operation is moving forward, we need to use our diplomatic and more traditional intelligence assets to bring pressure on the governments of Qatar and Saudi Arabia, which are providing clandestine financial and logistic support to [ISIS] and other radical Sunni groups in the region,” the email said.

It’s unclear whether the email was actually authored by Clinton.

The Clinton campaign, meanwhile, has blasted WikiLeaks over the release, while ramping up its accusations that the group is working with the Russian government.

“It is absolutely disgraceful that the Trump campaign is cheering on a release today engineered by Vladimir Putin to interfere in this election, and this comes after Donald Trump encouraged more espionage over the summer and continued to deny the hack even happened at Sunday’s debate,” spokesman Glen Caplin said in a statement. “The timing shows you that even Putin knows Trump had a bad weekend and a bad debate. The only remaining question is why Donald Trump continues to make apologies for the Russians.”

A request by the US to extradite Julian Assange has been signed by the Home Secretary Sajid Javid ahead of a court hearing on Friday. By certifying the request, Mr Javid has effectively rubber-stamped it […]

A former torrent site operator has avoided demands for years in prison and millions in damages. Instead the 25-year-old owner of private tracker SwePiracy was handed 100 hours community service and told to pay $194,000. SwePiracy […]

Sweden’s director of public prosecutions has decided to drop the rape investigation into Wikileaks founder Julian Assange. Marianne Ny filed a request to the Stockholm District Court to revoke his arrest warrant, apparently ending a […]