I may have only been 10 years old, but I clearly remember the deadly blizzard that hit the western areas of upstate New York as well as Southern Ontario from January 28 to February 1, 1977. 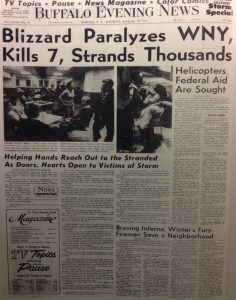 The combination of bitter cold, high winds, and blowing snow paralyzed my area, and it was more than a week before the deadly effects of the storm subsided enough to resume our lives, or even leave our home. Daily peak wind gusts ranging from 46 to 69 mph were recorded by the National Weather Service in Buffalo, with snowfall as high as 100 inches recorded in some areas.

High winds blew this accumulated snow into drifts of 30 to 40 ft . 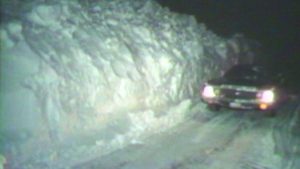 There were 23 total storm-related deaths in western New York, with five more in northern New York. On the afternoon of Thursday, January 27, the National Guard was called to the region with equipment to help clear the streets of snow.

From midnight to 11:00 am, the temperature at the Buffalo airport rose from 5 to 26 °F.  Snow began around 5:00 am, with about 2 inches of new snow prior to the beginning of the blizzard.  At 4:00 am, the Buffalo NWS office indicated “very strong winds will once again produce near blizzard conditions beginning late this afternoon and continuing tonight”.  At 11:00 am, a blizzard warning was issued, which was the first time the Buffalo NWS office had done this.

That morning observers on the 16th floor of the M&T Bank Building in Buffalo watched as a gray wall covered the city; it appeared white as it came closer. A blast of wind hit the building that caused the floor to move and the glass window to creak, and then the wall of white enveloped the building. It was 11:10 am. The following video is from 2014, but you can rest assured that the arctic blast looked very similar to this.

During the four hours after the blizzard hit, the temperature at the Buffalo airport (where the Buffalo office of the NWS is) fell from 26 to 0 °F. The depth of snow quickly caused many roads to become impassable (within 30 minutes in the part of Buffalo nearest Lake Erie), and the blowing snow caused extremely low visibility, making travel nearly impossible.

In addition to the roads becoming impassable, motorists also had to deal with vehicles breaking down due to the combination of very cold temperatures, very high winds, and blowing snow.

That night people stayed in whatever shelter they could find. Authorities estimated that approximately 13,000 people were stranded Friday night in downtown Buffalo

With many roads becoming impassable, the City of Buffalo police were almost immobile by Friday evening. Through radio and television, citizens were asked to loan snowmobiles and four-wheel drive vehicles to the Buffalo police. 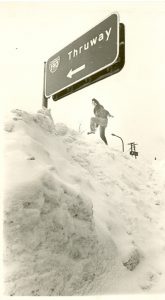 Looting broke out and items stolen included radios and firefighters’ clothing from fire trucks as well as more than $1,500 in medical supplies from a stuck ambulance. Cigarettes, liquor, beer, coffee, meat and refrigerators were stolen from abandoned semi-trailer trucks. By midnight Friday, an estimated 2,000 cars were stranded on Main Street and about 8,000 on other streets in the City of Buffalo.

The total snowfall for the storm was only 12 inches. The blizzard was made unique by the sustained winds, gusting up to 69 mph, which picked up the snowdrifts piled on the frozen Lake Erie and dumped that snow load in western New York and southern Ontario. The winds were accompanied by Arctic-cold temperatures, making it feel like −60 °F.

Whiteout conditions had trapped people at work, in cars and in homes; some had to stay for a day, while others had to stay for the storm’s duration. At the Buffalo zoo, 8 ft drifts allowed three reindeer to walk over their fence and wander about the city.

I, sadly, had to eat cheerios and PB&J sandwiches for a week, but lived to tell the tale.