The operator of Australia’s Dreamworld theme park has been fined A$3.6m (£2m; $2.5m) over the deaths of four people on a malfunctioning water ride.

Kate Goodchild, Luke Dorsett, Roozbeh Araghi and Cindy Low died in October 2016 when their raft crashed into another and overturned, crushing them.

The company said it accepted responsibility and had worked to improve safety standards.

The four victims – all adults – died almost instantly after the Thunder River Rapids Ride rafts collided, an inquiry heard in 2018. Two children were also on board but survived.

The accident at Australia’s biggest theme park was caused by a pump that malfunctioned near the end of the ride.

On Monday, a court said the company had failed in its duty of care and should have taken steps to make the ride safer.

“Steps were not that complex or burdensome and only mildly inconvenient and really were inexpensive,” Magistrate Pamela Dowse said.

“They operated the most iconic amusement park in the country, which targeted and attracted families.

“There was complete and blind trust placed in the defendant by every guest who rode the Thunder River Rapids Ride.” 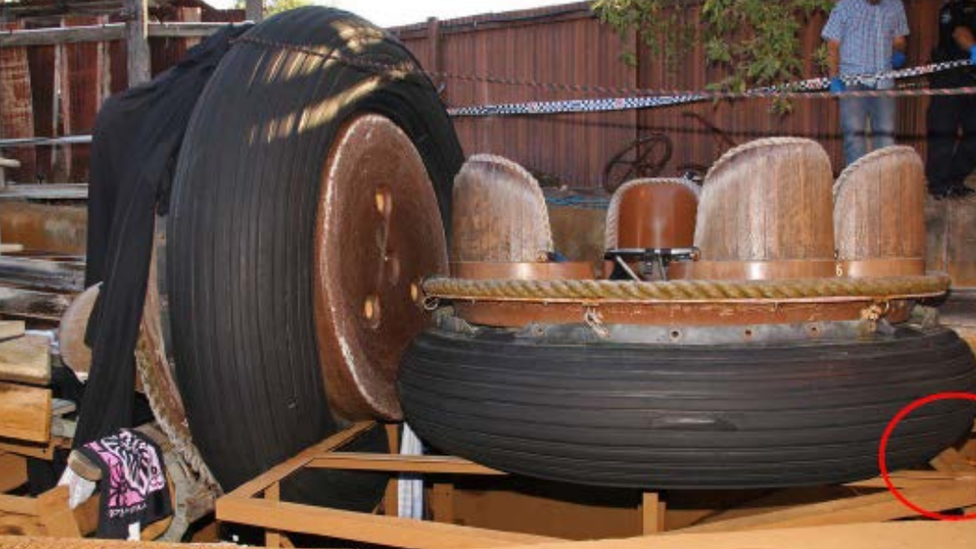 The raft carrying passengers flipped in the collision

The size of the fine reflected the severity of the company’s failure, she added. Ardent had been facing a maximum A$4.5m fine.

Families of the victims also delivered statements to the sentencing court on Monday, expressing grief and anger over their loss.

In February, a coroner found the accident had been “only a matter of time” as the theme park had not properly assessed the ride’s safety risk in over 30 years.

Dreamworld briefly shut down for six weeks after the accident in 2016, during which it demolished the ride.

The company has reported operating losses every year since the accident, including more than A$260m in losses in its theme park division.

It is also fighting a class action from shareholders who claim the company misled them on the park’s safety measures.

The accident also prompted Queensland to introduce an industrial manslaughter offence in 2017. It cannot be applied retroactively.

Australian sentenced to death in China for drug smuggling

An Australian man has been sentenced to death in China for drug smuggling, the Australian government has confirmed. The man was named in Australian media as Karm or Cam Gilespie. He is believed to have […]

Australian police say they have found the partial remains of a fraud suspect who vanished from her Sydney home four months ago. Businesswoman Melissa Caddick’s disappearance has captivated public attention, amid allegations she stole millions […]

Vatican treasurer Cardinal George Pell will stand trial on historical sexual assault charges, a court has ruled. Cardinal Pell formally pleaded not guilty to the charges on Tuesday. He has consistently denied any wrongdoing. An […]