The case of  Ahmaud Arbery drew national attention when video of his death in the US state of Georgia emerged on Tuesday.

Mr Arbery, an unarmed black man, was jogging in February when Gregory McMichael and his son Travis, who are white, confronted him. They now face murder and assault charges.

Police had not charged the McMichaels for more than two months, but the pair were detained on Thursday by the state bureau of investigation.

Gregory McMichael, 64, and Travis McMichael, 34, are in the custody of the Glynn County Sheriff’s Department, officials said on Friday.

Both were charged with felony murder and aggravated assault.

State investigators earlier said the father and son had followed Mr Arbery and confronted him with two firearms, and the younger McMichael shot and killed him.

Mr Arbery would have turned 26 on Friday. Rallies have taken place outside of courthouses in Glynn County and in neighbouring Jacksonville, Florida.

Online, supporters of Mr Arbery have been using the hashtag #IRunWithMaud, sharing photos and running 2.23 miles (3.6km) in remembrance of the day he died, 23 February.

What does the video show?

The 36-second video is shot from a vehicle following the pick-up truck said to be involved in the incident.

It shows a man jogging and then approaching the stationary pick-up from behind. He tries to bypass the truck and then is seen struggling with a man carrying a shotgun. There is muffled shouting and shotgun shots are heard.

A second man is standing in the bed of the pick-up. The second man is then shown with a pistol standing alongside the other armed man with the jogger no longer in view. 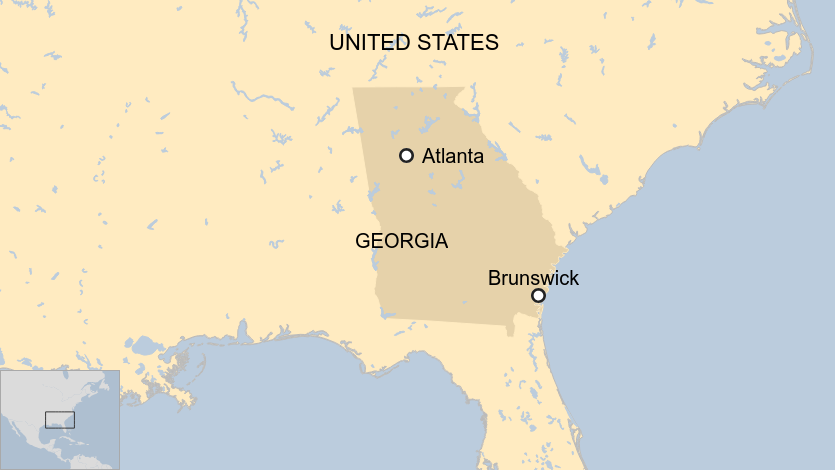 Mr Arbery’s mother told CBS on Wednesday that the video was too painful for her to watch immediately, but that she hoped the video “proves that my son was not committing a crime. He was out for his daily jog and he was hunted down like an animal and killed.”

What has the family said?

“I just want justice for my son,” Mr Arbery’s father, Marcus, told CNN on Friday. He said the arrest was a “relief” for the family, and described his son’s killing as a “lynching”.

“He was a very good young man,” Mr Arbery said of his son. “His heart was just bigger than life.”

Benjamin Crump, a lawyer for the family, asked for the same justice for Mr Arbery as if the situations were reversed and Mr Arbery and his father had attacked an unarmed white man.

“We know beyond a shadow of a doubt they would’ve been arrested on day one,” Mr Crump said, adding that he does not trust the local police department.

He called for the Georgia Bureau of Investigation (GBI) to investigate the officers who did not arrest the McMichaels.

“Either they were incompetent or it was intentional.”

GBI Director Vic Reynolds told reporters at a news conference on Friday that the McMichaels had been taken into custody without incident.

He said the investigation is ongoing. The individual who filmed the video – another local man – is also under investigation.

When asked about the previous police investigation into the case, Mr Reynolds said he could not comment, but that it had “gotten to a good point”.

Mr Reynolds also noted that his agents were able to secure warrants for murder within 36 hours.

“I think that speaks volumes for itself in that the probable cause was clear to our agents very quickly.”

He said in a “perfect world” his agency would have been involved back in February, but by the end of the case, “every stone will be turned over, I promise you”.

In a span of 12 hours, a video showing the final moments of a young Brunswick man’s life upend…

Mr Durden is the third prosecutor involved, as two local district attorneys eventually recused themselves due to professional connections to Gregory McMichael, who is a former police detective.

Two county commissioners have told the Atlanta Journal-Constitution that in February, District Attorney Jackie Johnson did not allow police to arrest the McMichaels immediately after the shooting.

“The police at the scene went to her, saying they were ready to arrest both of them,” Commissioner Allen Booker said. He claimed Ms Johnson “shut them down to protect her friend [Gregory] McMichael”.

Her office has not commented to local media, and did not immediately respond to a request for comment from the BBC.

The second attorney had told police he believed the father and son had used citizen’s arrest rights in confronting Mr Arbery.

The shooting has led to a wave of outrage from national figures, including presidential candidate Joe Biden and basketball star LeBron James.

Mr Biden said Mr Arbery had been “shot down in cold blood” and “essentially lynched before our very eyes”.

Mr James tweeted: “We’re literally hunted EVERYDAY/EVERYTIME we step foot outside the comfort of our homes!”

How did Arbery die?

Mr Arbery was out for a jog in the city of Brunswick early in the afternoon on 23 February – something his father said he did often.

Mr McMichael and his son armed themselves with a pistol and a shotgun and pursued Mr Arbery in a pickup truck in the Satilla Shores neighbourhood.

The elder Mr McMichael told police he asked Mr Arbery to stop and talk, and claims the 25-year-old attacked his son.

The 36-second clip appears to show the younger Mr McMichael firing a shotgun at point blank range at Mr Arbery and the victim falling to the street.

The Gambia has demanded a “credible” investigation after the son of a diplomat was shot dead by US police. Thirty-nine-year-old Momodou Lamin Sisay was shot after a car chase in Georgia on Friday morning, according […]

Boy, 15, ‘shoots dead his mom’s boyfriend after he threatened her with a steak knife and said he would torment her until she commits suicide’

A 15-year-old boy has been charged with first-degree murder for shooting dead his mother’s boyfriend, after he threatened to ‘torment her until she committed suicide’. The incident happened early Wednesday morning at the home Jessica […]

A 90-year-old US lottery winner is suing her son and his financial advisers for allegedly mismanaging her fortune. Gloria Mackenzie became the biggest single Powerball winner in US history when she took home the $278m […]