Former US President Barack Obama has turned up for jury duty at a Chicago courthouse, but was dismissed by the judge without being called on to serve.

Crowds thronged the Daley Center municipal building to catch a glimpse of the 44th US president.

There was no official explanation for his dismissal, but it is not uncommon for people called to perform jury service not to be assigned a case.

Mr Obama arrived at court on Wednesday morning and left around midday.

The former president, who was once a law professor, has a house in Chicago. 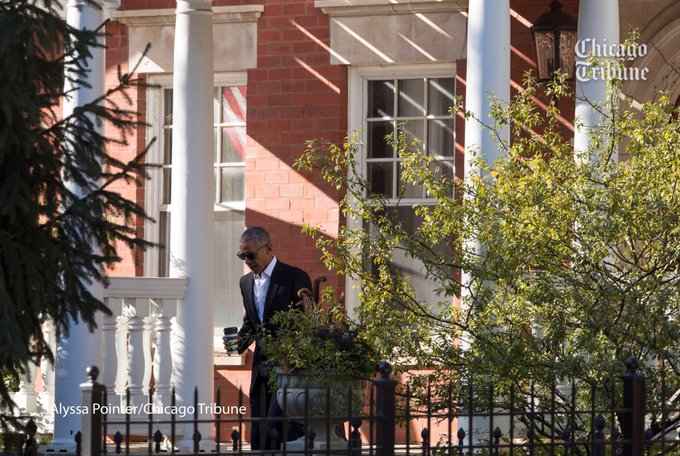 News helicopters filmed Mr Obama’s motorcade as it moved from his home in the Kenwood neighbourhood to an indoor car park downtown.
Wearing a jacket but no tie, Mr Obama took a lift to the 17th floor, where he was met by other jurors as well as journalists, court staffers and lawyers.

He was not there for long. Mr Obama was randomly selected for dismissal and was told his services were not required by Cook County Chief Judge Timothy Evan.

Before leaving Mr Obama thanked everyone who turned up for being willing to serve on a jury.

Some of his fellow Americans brought copies of Mr Obama’s books for him to sign. Others, including courthouse staff, just wanted a photo.

One potential juror told a local newspaper she felt like a “piece of melting butter” as she shook the former president’s hand.

Katie Hill, communications director for Mr Obama, said in a statement that the former Democratic president “believes the most important office in our democracy is that of citizen, and he considers jury duty a core obligation of citizenship”.

Mr Obama had previously been summoned in 2010, during his first four-year term as US president, but he managed to get a postponement from the court.

His reason was that he had a previously scheduled meeting with the president of the Kurdistan region of Iraq.

After posing for photos with other jurors, he was also dismissed.

In 2013, Bill Clinton was also dismissed from serving on a New York City jury hearing a gang shooting case.

About World Justice News 3138 Articles
Brings you breaking crime news and other interesting crime stories from around the world.

The Trump administration has asked the US Supreme Court to invalidate Obamacare, which has provided health insurance to millions of Americans. Government lawyers said the act became invalid when the previous Republican-led Congress axed parts […]

A Florida juror has been sentenced to 10 days in prison after he overslept and missed the start of a court case. Deandre Somerville, 21, of West Palm Beach, was chosen to serve on a […]

Kim Dotcom: Obama Admitted “Mistakes Were Made” in Megaupload Case

Kim Dotcom is claiming that an associate was able to hire a friend of the Obamas to ask about the Megaupload case. “Mistakes were made. It hasn’t gone well. It’s a problem. I’ll see to […]