Seventeen journalists and managers at Turkish opposition newspaper Cumhuriyet were facing trial on Monday on charges of aiding a terrorist organisation.  If found guilty this week, they could face sentences of up to 43 years in jail. Ten have already been in pre-trial detention for almost nine months.  At the Istanbul courthouse a large crowd of supporters let off balloons and called for their release.  There was chaos as they tried to enter the court for the start of the trial.  One of the journalists on trial is Turhan Gunay, 71, the editor-in-chief of the newspaper’s book supplement.

“I cannot touch him. I cannot hug him,” says his daughter, Elif, who is allowed to visit him once a week, for an hour.

“We talk over the phone behind a glass. When the time is up, they cut the line. 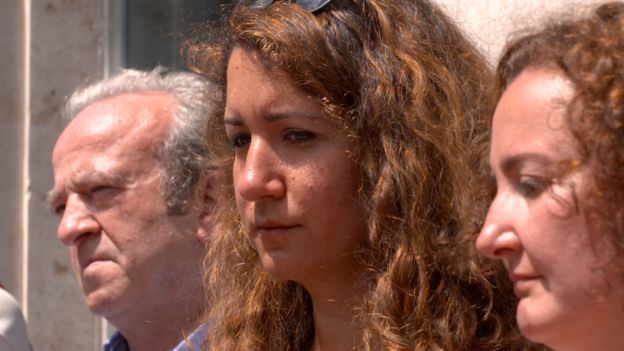 Elif Gunay (C) says she struggles to understand why her father, who ran the paper’s books section, has been jailed

“It is so frustrating to be taken away from him every week.”

She says he has been through various health problems, including atherosclerosis (a hardening of the arteries) followed by an operation.

“But even that was not enough for him to be released on bail,” she complains.

Elif Gunay says she still struggles to understand why he has been jailed.

“All I can say is that this is a political case. They are held for being journalists, for doing their jobs,” she argues. 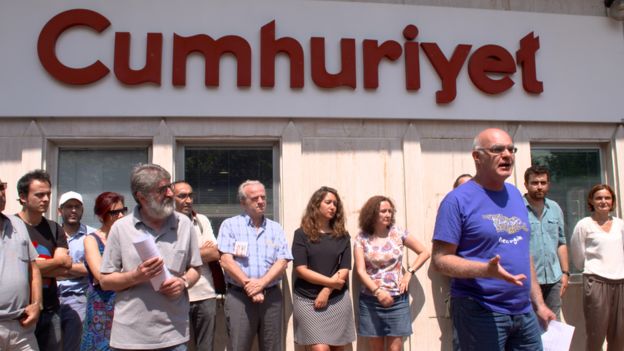 Just over a week ago, Turkey marked the first anniversary of a failed coup. There were massive commemorations held by thousands of jubilant people, hailing the day as the triumph of democracy.  But critics argue that day – and the introduction of the state of emergency soon after – were actually the beginning of a massive crackdown, with more than 50,000 people arrested in the last year.

Press freedom groups say media has been particularly hard hit during this period, as about 150 media outlets have been shut down.  Turkey is currently listed as the country with the biggest number of imprisoned journalists. Journalism organisations say more than 150 journalists are behind bars, most of them accused of terror charges.  But the government contradicts that figure.  Speaking to the BBC earlier this month, President Recep Tayyip Erdogan said there were only two jailed journalists in the country.

“The rest are either terrorists, or they were carrying guns, or they robbed ATM machines,” he said.

The previous editor-in-chief of Cumhuriyet newspaper is the number one suspect in the case starting on Monday.  Can Dundar was give a three-month jail term last year for espionage in another case but was released on bail. He now lives in exile in Germany.

“I wonder who those two journalists Mr Erdogan speaks about are,” he says while speaking to the BBC on Skype.

He too gives the figure of imprisoned journalists as more than 150. 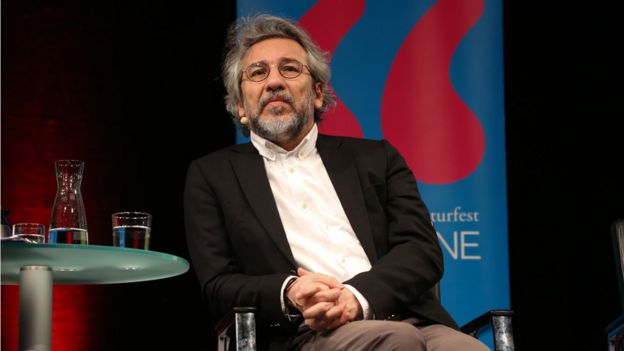 Can Dundar was imprisoned in Turkey and survived an assassination attempt during his trial; he now lives in exile in Germany

“He regards every criticism as an insult to himself or as a terrorist act. We know that all those people are journalists and they’ve done nothing but journalism.”

‘One of the last castles’

In the indictment against Cumhuriyet, there are accusations such as “changing the paper’s editorial policy”, preparing “violent and divisive news” and “interviewing leaders of terrorist organisations”.

“This is an oddity, it is absurd,” says defence lawyer Adil Demirci.

“This is obviously a political case. They are targeting Cumhuriyet because it is an opposition paper.”

The head of media organisation PEN Turkey, Zeynep Oral, believes the state of press freedom in the country is the worst it has been for decades.

“You never know what will happen tomorrow,” she says.

“Anybody can put anybody into jail these days. But even if a single journalist is behind bars for no reason, no-one will ever be free in this country.”

Journalists and press freedom activists all over the world will be watching the Cumhuriyet trial very closely. The hearings are expected to last all week.  Mr Dundar thinks the outcome of this case could be indicative of the route Turkey is willing to take in the near future.

“Cumhuriyet is one of the last castles of free media in Turkey,” he says.

“If we lose this last castle, there will be no more free press in our country.”

China has placed a prominent human rights lawyer on trial for subversion. Wang Quanzhang went missing in a crackdown on hundreds of lawyers and activists in 2015, and is one of the last to be […]

Prominent Pakistani human rights activist and lawyer Asma Jahangir has died at the age of 66. She reportedly suffered a cardiac arrest and was taken to hospital, where she later died. The pro-democracy activist championed […]

The estranged wife of the ruler of Dubai – one of the most high-profile leaders in the Middle East – has asked for a forced marriage protection order in a UK court. Sheikh Mohammed Al […]