A man has died in a police shooting during an operation near the M62.

West Yorkshire Police said a police firearm was discharged at about 18:00 GMT on Monday in Huddersfield.

A force spokesman said five people were arrested as a result of the operation, including three in the incident on the M62. The case has been referred to the police watchdog.

Traffic is now able to access the M62 eastbound at Junction 24. All other slip roads remain closed.

Those arrested required hospital treatment for injuries “not related to firearm discharge”, the spokesman said.

No officers were injured in the incident.

A West Yorkshire Police spokesman said: “During a pre-planned policing operation near to the M62 in Huddersfield, a police firearm was discharged and a man has died.

“An immediate referral has been made to the Independent Police Complaints Commission (IPCC), who are in attendance in West Yorkshire, and West Yorkshire Police are fully co-operating with their investigation.”

He said two of the five arrests were made during a second vehicle stop in the Chain Bar area of Bradford, also at about 18:00 on Monday.

The force said neither incident was terrorism related.

The IPCC said an investigation into the incident was under way and the man’s family has been informed.

BBC reporter Nick Garnett reported from the scene that West Yorkshire Police is calling it a “pre-planned operation” and, looking at the number of police vehicles involved, it is fairly clear this wasn’t a response to something the force did not know about.

The operation appears to have been planned around one car – believed to be an Audi.

It appears to have been heading off the M62 at around 17:30 GMT on Monday, heading towards Huddersfield, when it was stopped by at least one unmarked police car that was following it.

The car that was stopped, which is still there this morning, was boxed in. Shortly after this a shot was fired and a man died.

A close-up photo shows the marks from what appears to be three bullets in the Audi’s windscreen and a side window that has been smashed.

Eyewitness Rahul Tandon, from Halifax, told BBC Radio Leeds he was stopped by police on the exit slip road of junction 24 as the incident happened.

“As we pulled off the motorway we could see a lot of police vehicles, a lot of flashing lights,” he said.

“We were basically the first car that was stopped by police and we just waited and waited.”

Mr Tandon added: “Over the next 10 to 15 minutes there was frenetic activity as more and more police vehicles arrived.

“At about 6.15 to 6.20, policemen were running up the slope to an ambulance and beckoning them to come quickly.”

He said the police eventually told him and other drivers to leave the scene by reversing up the slip road and back on to the M62.

UPDATE:
A suspected firearm was found in a car carrying a man who was shot dead in a police operation off the M62, the watchdog the IPCC has said.

The man killed in the shooting has been named as Yassar Yaqub from Huddersfield. 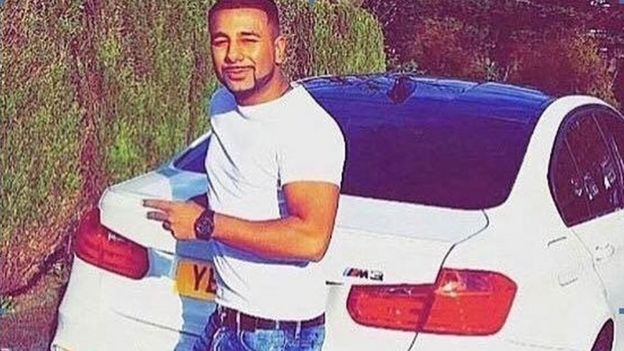 Yassar Yaqub, 28, was fatally wounded in Huddersfield on a slip road at Junction 24 on Monday evening.

What appeared to be a non-police issue firearm was found in the vehicle Mr Yaqub was travelling in, the IPCC said.

Police are believed to have searched his home in the town. Armed officers could be seen outside.

The weapon found at the scene is being “further examined”, the IPCC said.

Its investigators are continuing to seek any relevant CCTV footage and initial accounts have been obtained from the police officers involved.

A spokesman for Mr Yaqub’s family said they were “in shock, and are distraught”. He asked for their privacy to be respected.

Mr Yaqub, of Rudding Street, Crosland Moor, Huddersfield, was acquitted of attempted murder seven years ago following a shooting in Birkby in the town.

He was found not guilty after a judge threw out the prosecution case against him, the Huddersfield Examiner reported.

IPCC Commissioner Derrick Campbell: “My thoughts are with Mr Yaqub’s family and all those affected at this difficult time.

“Though in its early stages, this investigation is making good progress but will be complex.” He asked for patience while the IPCC investigation continues.

A prison brawl in Brazil has left at least 25 people dead after inmates were beheaded and burnt in violent gang clashes. The bloody battle between opposing factions in the Boa Vista jail began when […]

A man has been found guilty of murdering eight members of the same family, whose home was set alight with petrol bombs while they slept. Shahid Mohammed, 37, carried out the attack on the house […]

A Hitler lookalike has been arrested in Austria on charges of glorifying the Nazi era, local officials say. The 25-year-old man reportedly calls himself Harald Hitler. The man, sporting a side parting and a trademark […]