Police say former world champion sprinter Tyson Gay’s 15-year-old daughter has been killed in a shooting.  Police in Lexington Kentucky said Trinity Gay was hit in the neck during an exchange of fire between vehicles in a restaurant lot.  She was taken to a hospital where she later died, according to local media.

Mr Gay, from Lexington, confirmed her death:  “She didn’t make it. I’m so confused. She was just here last week for fall break. It’s so crazy. I have no idea what happened.”

Police have arrested 3 men and they have been charged with wanton endangerment. 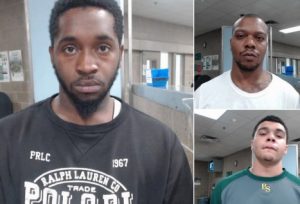 Mr Gay represented the US at the Rio Olympics, he’s the US 100 meter record holder and is the joint second-fastest 100 meter runner of all time, behind Usain Bolt.

Mr Gay’s daughter was an athlete and competed for Lafayette High School, where she was studying.

Three men have pleaded not guilty and face an Oct. 25 court date on charges connected to the shooting death of Olympic sprinter Tyson Gay’s 15-year-old daughter.

The three appeared Monday via video before Fayette County, Kentucky, District Court Judge T. Bruce Bell, who will assign attorneys for them.

Lexington police say Middlebrooks was in the parking lot of the Cook Out restaurant and fired multiple shots in the incident in which Trinity Gay was killed early Sunday. Court records show the Taylors admitted also firing shots.

An armed police officer accidentally shot a driver in the arm while trying stop his car, a police watchdog report has concluded. Officers stopped the Mercedes car in Castle Lane West, Bournemouth, on 7 August […]

A gunman has killed eight people at a commuter train yard in California. The shooting took place at the Santa Clara Valley Transportation Authority (VTA) rail yard in San Jose. Officials say the victims include […]

Three men have been shot in an attack on a street in east London. Police were called to reports of a shooting on High Road in Leyton at about 20.50 BST on Saturday. The victims […]

5 intel officers killed in shootout with militants in Sudan
'No thank you, Prime Minister', Polish trucker says to British Christmas visa offer
WHO horrified over sexual exploitation by aid workers in DR Congo
EXPLAINER: Why and how the UK is experiencing a fuel crisis
'Neglected danger': Nukes not in forefront in speeches at UN
Germany's conservatives in chaos as key allies break ranks
UN:: New meeting this month to draft Syria constitution
Lenovo Champions Collaboration and Science-Based Commitments at Climate Week NYC
Exit bans and 'hostage diplomacy': Why release of Westerners may be a warning from Beijing
Young activists bemoan climate inaction, demand more say