Patients in England can now have home abortions during the Covid-19 outbreak, the government in England has said.

Abortion policy has changed several times during the current pandemic.

Women and girls wanting to terminate an early pregnancy were first told the service would be available but that decision was then retracted.

Now, the government has decided patients can take two pills at home instead of going to a clinic to avoid exposure to coronavirus.

Charities had been worried that women who want an abortion but have underlying health conditions would put themselves at risk to have the procedure or turn to dangerous alternatives.

The Department of Health in England told Newsbeat that “public safety and continued access to key services is our priority during this difficult period.

“We are updating our guidance so women who need an abortion up to ten weeks and can’t access a clinic can use abortion pills at home.

“This measure will be on a temporary basis and must follow a telephone or e-consultation with a doctor.”

It told us it will set out the next steps “shortly” for England.

We are pleased to announce that the Government has reinstated the use of a telemedical abortion service that will now protect women across the country! 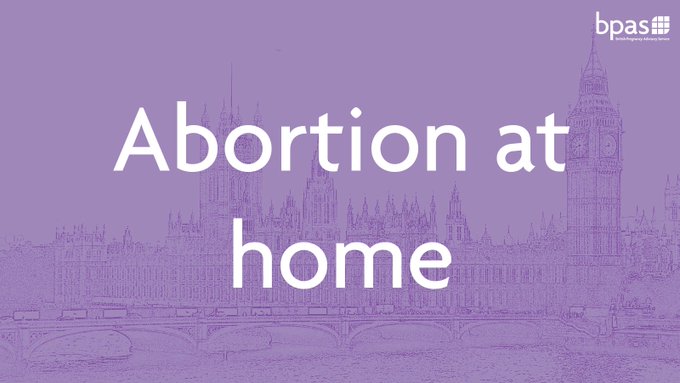 Issues relating to health are devolved meaning that decisions are made by governments in each of the four countries of the UK.

It looks like what is available for those wanting an abortion depends on where you live and get treated.

The Welsh Government told Newsbeat it is “considering temporary changes to enable women seeking early medical abortions to continue to access this provision during the coronavirus pandemic.”

This message was repeated by the Scottish government.

It said it is “actively working with abortion care providers to temporarily enable patients having an early medical abortion to have their consultation by telephone or video call so they can follow public health advice to stay at home and minimize social contact.

“Following the consultation, if the patient wishes to proceed the medication will be delivered to her home.”

The laws on abortion have just changed in Northern Ireland with it being decriminalised in October last year. Patients have been travelling to England to have a termination but that was due to change in April.

Newsbeat has asked for clarification on whether that means women still travelling to England for a termination.

If you ever doubt why it matters to ensure safe, legal and local access to abortion in the UK especially during the covid19 crisis crisis please read this – heartbreaking and my thoughts very much with her family @All4Choice @maraclarke https://twitter.com/maraclarke/status/1244633058864779264 …

We need urgent action after yesterday’s tragedy / travesty in Northern Ireland. From @All4Choice:

Labour MP Stella Creasy campaigned to bring about the change in law in Northern Ireland.

“Health care is a devolved matter but that doesn’t devolve a human right not to be forced to have an unwanted pregnancy,” she told Newsbeat.

What is a medical abortion?

Around 180,000 abortions are carried out in England each year, with medical abortions the most common way of ending an unwanted pregnancy, official government figures show.

The first, mifepristone, stops the hormone that allows the pregnancy to continue working.

The second, misoprostol, is normally taken 24 to 48 hours later, and encourages the womb to contract to pass the pregnancy.

After four to six hours the lining of the womb breaks down, causing bleeding and loss of the pregnancy.

Under current regulations women wanting to end a pregnancy have to go to a registered clinic to collect and take the first pill. They are given the second medication to take at home.

However, the leading provider of abortion services in the UK, BPAS insists there is no need to go to a clinic.

About World Justice News 2392 Articles
Brings you breaking crime news and other interesting crime stories from around the world.

A court in El Salvador has freed a woman who was sentenced to 30 years in prison after she gave birth to a stillborn baby in a toilet. Evelyn Beatríz Hernández Cruz, 20, had served […]

US President Donald Trump’s government has dropped its plans to deport international students whose courses move fully online because of the coronavirus pandemic. The U-turn comes just one week after the policy announcement. The Massachusetts […]

A hotly-contested case about insurance payouts for small businesses who were unable to trade owing to lockdown heads to the Supreme Court on Monday. A host of businesses closed or faced significant losses, so made […]